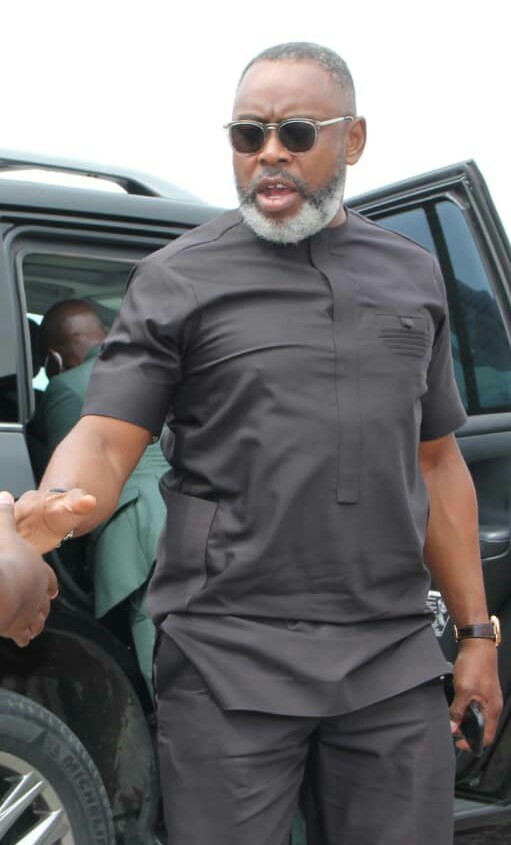 RE : 2023 GOVERNORSHIP: I’M NOT A CHRISTIAN — AKAN UDOFIA DECLARES

Our attention has been drawn to the above spurious, infantile, empty and senseless story, with the riders, ” Churches to start paying tax to AKSG if elected Governor”
” His divorce status worrisome — Woman leader” , hurriedly invented, devised and aggressively circulated in the social media space which has been falsely attributed to Mr. Akanimo Udofia, CEO of Desicon Group, a man largely cerebrated as a polished gentleman, God fearing Christian, industrious entrepreneur and successful son of Nsit Ibom, who fortunately for Akwa Ibom, is one of the front line contenders for the Hilltop Mansion come 2023.

We would ordinarily have ignored this hatchet job from a faceless gang of paid cowards and dismissed same for what it is : ” The handiwork of political jobbers and lily livered governorship aspirants” whose grand desires is to dim the chances of, and deceive Akwa Ibom electorate already swayed and carried by Mr. Akan Udofia’s intimating credentials in business and industry, charity and philanthropy, vast connections and exposure and have decided to root for him in the 2023 gubernatorial race”, considering the fact that it is empty, cooked, senseless, untrue and falsely fashioned out to put in bad light, dent the spotless reputation, solid background, unmatched antecedents, established material strength, rare exposure, uncanny goodwill, large support base, unquenchable guts, conscious efforts and visible commitments towards the fast approaching 2023 governorship race in the State.

But for posterity and the momentous need to guide our people for future benefits, since silence, as they say, implies acceptance of the issue at stake and means the truth, we have decided to put the record straight, lest they be unknowingly deceived and hood wink into believing the clear falsehood contained and propagated in the said ill fated story.

It is therefore condemn in its entirety how people who specializes in giving and taking of secret oaths most especially to their political loyalist will come out to accuse an innocent man of being
atheists, thereby misleading members of the public and sending wrong information to the good people of Akwa Ibom State.

We make bold to say that our principal who has a grounded Christian background, having been born into a well structured Christian home and bred by parents whose total belief in God and dependence on His sovereignty and supremacy is unflinching and has remained unshakable did not, and could at no time utter such blasphemy linked to him, as a bounteous beneficiary of His grace and a living testimony of God’s manifold blessings.

The paid senseless writers, confused and short of what to write, wrote what any discerning reader will decipher as false and bereft of any iota of truth , as no public figure who is interested in seeking the peoples mandate particularly for a position as important as governorship will make such satanic pronouncement even though he were an atheist.
It is on record, that Akan Udofia has consciously invested his god given and hard earned resources into the propagation of His word and the expansion of His kingdom through evangelism as evident in his construction of The Lutheran Church Cathedral in his village, his wife’s village in Delta State and a Monastery sited on a 10 hectares of land in Epe, Lagos,which attracted the attention of the then Holy Father, Pope John Paul (11) all to edify God , his maker.

One wonders therefore, how a man who goes about building Churches to God’s glory and for the expansion of His kingdom towards the Salvation of Mankind will upon being elected as governor turn to impose taxes of any kind on the same Christians he has been encouraging in their quests for salvation !

Akan Udofia is not only an Elder of the Lutheran Church but a committed tither and communicant who is considered as a big blessing to the Church by the entire Lutheran Clergy.

In furtherance of their image smearing campaign, the half intelligent jobbers, went further to accused Akan of being a divorcee. You see, people play politics with every thing in this part of the globe. Or how on Earth will a fine, responsible, focused family man whose 27 year old marriage has produced three dutiful children, all Masters Degree holders from some of the best universities in the world be said to be single ? Mr. Akan Udofia understands that a good marriage and success in life is inseparably intertwined hence pursues his marital union with vigour, passion and a keen sense of responsibility and perhaps, may be the only son from Akwa Ibom who has had his marriage blessed by the Holy Pontiff of the Catholic Church even when he is not a member of the Church.

The empty writers, despite knowing fully well that their story has no anchor in truth and fairness, defied all civility to mention Obong Victor Umodak, a former Chairman of Nsit Ibom and now SA to the Governor, a former Commissioner for Education in the State, Professor Nseabasi Akpan, the pioneer Chairman of Nsit Ibom, Mr. Ubong Iyoho, current Provost of the Akwa Ibom State College of Education, Afaha Nsit, Dr. Daniel George Udo and others. These persons are all alive and reside within the State, l challenge Akwa Ibom people to get in touch with any of them to find out if the revered Akan Udofia had at any time uttered the blasphemies attributed in bad fate to him.

We live in interesting times. So, Akwa Ibom people, there is the need for you to sharpen up your minds and be very selective and watchful of what you digest and accept as true, for political jobbers, paid hatchet writers and propagandists will sure be on the prowl in the days, months and years ahead, all towards the contest for the Hilltop Mansion top job 2023.We shall steadily take this struggle to a logical conclusion for the sake of our people whose right it is to enjoy dividends springing from democracy .

Fellow Akwa Ibom people, With Akan Udofia’s vast humanitarian outreach, business acumen, exposure on a global scale, willingness to expand the banks of the Christian fold through evangelism and accommodating nature, no hurdle with him as your governor from 2023 shall be insurmountable.