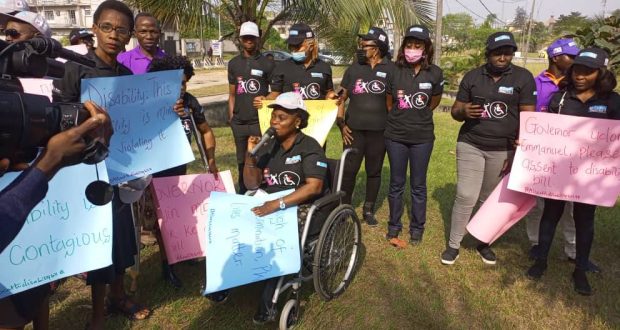 Project Alert on Violence Against Women, a non-governmental organization, in partnership with International Federation of Women Lawyers (FIDA), and Open Society Initiative for West Africa (OSIWA), led persons with disabilities (PWDs) on a mass rally in Uyo, Tuesday, to appeal to the state governor, Udom Emmanuel to assent to the disability bill.

Speaking on behalf of Project Alert, Barr Emem Ette said that the NGO has been advocating against gender based violence and protection of women with disability.

She said the rally was only one of the NGO’s activities to call the attention of the government to the rights of persons with disabilities and also the need for assent to the disability bill.

Love Archibong-Bassey, the state vice chairman of International Federation of Women Lawyers (FIDA), said that the disability bill would give a new lease of life to persons with disabilities.

Mrs Archibong-Bassey noted that she was very hopeful that the bill, which was already passed by the State House of Assembly, would be passed into law by the governor in no distant time.

“Today, FIDA is coming to stand with peopl living with disabilities and to call on our state governor to sign the bill into law in order to protect people with disabilities. As a caring father, we know that the governor will do this for us,” she said.

Affiong Bassey, the state president of PWDs, who spoke during a mass rally in Uyo on Tuesday, said that people with disabilities are suffering various forms of injustice and discrimination due because there is no law to protect them.

She noted that many of them are suffering deprivation within their families and even worse treatment in the society.

Bassey assured that the aim of the rally was not to ridicule the state government but to appeal to the governor to sign the disability rights bill into law as a Christmas gift to persons living with disabilities in the state.

“Today, we are not here to fight the government, but to beg the governor to sign the bill into law as his Christmas gift to us.

“With this bill, all the things we are suffering at home, in our families and even in the society, we will no longer suffer them,” she said.

According to her, there are over two million persons living with disabilities in Akwa Ibom.

Oliver Emediong, state publicity secretary, Joint National Association of Persons with Disabilities, said that persons with disabilities makeup a significant percentage of the state population and should not be neglected.

He noted that they have been struggling to cope in the midst of many unfavourable conditions and the continuous delay of the bill will only worsen their woes.

Emediong appealed to the governor to consider the plights of persons with disabilities by signing the bill into law in the spirit of the yuletide.

“I am using the opportunity to appeal to our governor to consider the plights of persons living with disabilities, and in the spirit of Christmas, should sign the bill as a gift to us,” he said.

Victor Ben disclosed that he has had various bad experiences as a person with disability which would not have happened if the disability rights bill was signed into law.

“I have faced so many challenges and one of them is discrimination. As a disabled person, a lot of people look at me as an outcast, somebody that is not worthy to live.

“Stigmatization is a serious problem. We face it on daily basis, even in our families, churches, schools and everywhere. In terms of accessibility, schools, churches and even public offices, are not accessible to us. We are facing the issue of exclusion in government activities.

“Deaf and dumb people are not being considered, but with the bill, they will be catered for by providing sign language teachers and other help,” he said.

Mr Ben, who leads the physically challenged community in his local government, lamented that people will disabilities in the rural communities are suffering the most discrimination and other dehumanizing practices.

In an interview with journalists, Joy Ubong, said that the country’s constitution only provides for the protection of people in general without specifically considering persons with disabilities.

“I have a whole lot of personal experiences especially on stigmatization and discrimination. It is so demeaning to see how people would go as far as deshumanizing persons with disabilities. Sometimes, it comes from a place of ignorance but not always.

“I remember how a known public figure in this state whom I don’t want to mention by name, called a person with disability, “broken bone” in a public place with a microphone. This is someone who is educated. Imagine that someone who is exposed did this, how about those who are not exposed?

“There is a lot of discrimination, there is attitudinal barrier, there is societal barrier and there is environmental barrier. There are infrastructures that are not accessible to persons with disabilities,” she said.

She noted that persons with disabilities are looking for an inclusive society where they can school, work and engage in social activities together with others.

“We just want the law because with the law, we will be able to have a commission and that commission will be able to mediate between us and the government. There is a whole lot that the law can address and this will bring out our innate abilities,” she added.