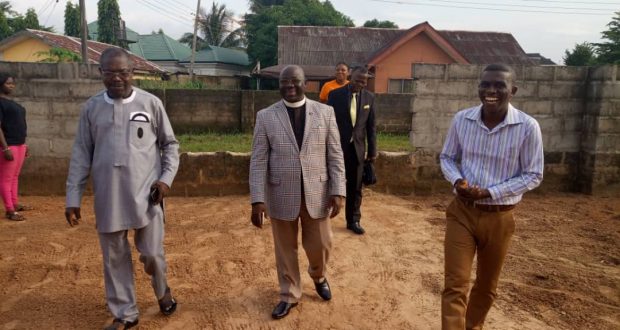 Detail TV was unveiled on Monday 17th June, 2019 by Prof. Mboho shortly before the dedication of the new Television Studio by the Uyo Field Superintendent of The Apostolic Church Nigeria, Apostle Ime George, Ph.D at the company’s corporate office in Uyo – Akwa Ibom State.

Speaking before dedicating the Studio, Apostle George who was received at the Detail office by Prof. Mbuk Mboho eulogized the vision of the company, noting that it was surprising that such a vision could born out of Akwa Ibom State.

He described the vision as lofty and innovative, stressing that it’s a vision that will shoot the company to national and global limelight.

“I am happy to see this kind of vision coming to reality in our own time. It is only God that can give this company such a fantastic vision and I am proud to identify with the vision. I love it because the Bible says ‘don’t despise the days of little beginning’. I prophesy to you that what you are seeing here as little today will surely grow to become a multinational firm”. Apostle George declared.

While urging the company to remain committed to their vision and work tirelessly to achieve their goal, the cleric said though there may be challenges, the Almighty God who gave the vision will surely perfect it to become great.

“Like the bible says, ‘whatever your hand findeth doing, do it with all your might, please be sure that you drive this vision with all your might, without derailing or being distracted. God will cause you to succeed and places within and outside Nigeria. The Apostolic Leader admonished.

Earlier in his welcome address, Prof. Mbuk Mboho thanked the Field Superintendent for accepting the company’s invitation to dedicate the Detail TV Studio, saying that it was an indication that God has honoured the media house and assured the Cleric that Detail TV is existing as the only available and best option for the people and the government who are in search of true details of daily happenings in the society.

Further, he said we are in the era where broadcasting is done in a digitalized and high level of professionalism, pledging that Detail TV will apart from upholding professionalism will make Akwa Ibom State proud as the firm is committed to going ‘beyond television’ to reality in excellence practice.

Apostle George was accompanied by a member of the Uyo Field Executive Council of The Apostolic Church, Apostle Prince Etim.

Among those in attendance were: the immediate past Special Assistant to the Governor on Research and Documentation, Ndanti Ekuh and wife, Mmenyene Abasi, the Head of Broadcast Department of Detail Company, Mrs. Oto-Abasi Tom who also doubles as the Secretary of the company as well as the the Managing Editor of Daily Detail Newspaper, Mr. Emmanuel Thompson.

Detail TV will be aired on AKBC and CRBC.