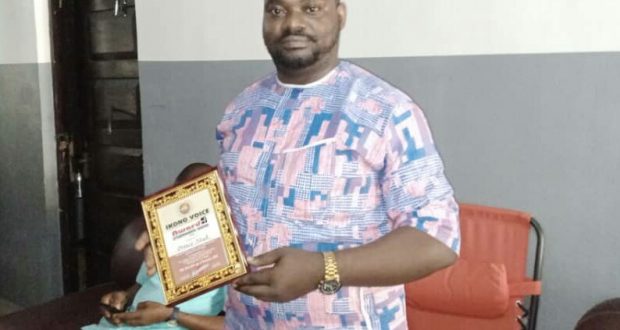 Speaking as the leader of Ikono Voice delegation was Comrade Joseph Etim who described the host as an exceptional youth with no mean reputation and presented the Award of Utuenikang Ikono to the Digital Entrepreneur for his sterling performances in community building and youths empowerment.

“We deliberated on the various awards to be given to deserving persons in Ikono and we considered you worthy of the award of the “UTUENIKANG IKONO” owing to your sterling performances over time. We completely acknowledge that you do not have any political office as at this morning and having read through your autobiography, it was more shocking that you are in the mid-thirties yet neither of these have limited you from the great works that you are doing.

We belong to a generation where the achievement of others are hardly celebrated or acknowledged but may we celebrate you for successfully training over 200 Akwa Ibomite on Digital Marketing, Website design and Mini- importation in a program tagged “AKWA IBOM EXPO 2020”. Indeed teaching a man how to fish is far better than giving him bread.

You are our own, if we do not celebrate you, who will? May we also acknowledge the Unity Football Tournament you organized in your community, the skills empowerment for youths and of course, the empowerment for widows. None of these things have gone unnoticed hence this award as the emerging light in Ikono Local Government Area” he concluded.

Speaking also was the Akwa Ibom Student Doctor’s Boss. He narrated how they had constantly used the antecedents of Prince Ntuk as case studies at various times and decided to present himself to a man he described as “The Touch Bearer” barely 24 hours after his inauguration as President. He prayed to God that this time, this emerging light will never go off.

Other speakers included Sir Rustom Alex who noted that Prince Ntuk is an instrument for use in the Ikono politics of today. He spoke on behalf of Ikono Pathfinders group.

While responding, the host, thanked the delegations for the visit and expressed mixed feelings over the award. “I was completely thrown off balance when I received a letter for this award from the organizers sometimes in December 2020. To me, I do not merit it as I am yet to fulfill my calling from God to Ikono Local Government. But on a second thought, I considered this award as a prophetic mantle for the numerous tasks ahead. Our Prayer is that My Boss, Hon. Nyakno Okoibu Succeeds in all he does. I will continue to serve him in any capacity to see that come to pass” he said.

He further used the occasion to appreciate The Executive Chairman of Ikono, Hon. Nyakno Okoibu whom he described as his boss at all times. He thanked His Excellency Deacon Udom Emmanuel for the Dakkada Philosophy which he said spurred him up to rise up as a youth and do great things.

He noted that the best way to show support for a Government is not to blackmail and slender the names of others to gain favour but to go to your units and wards and bring the benefits of the government you support to them. That way, the people at the grassroots through you will also celebrate the government who in one way or the other had favored you.

“May I not fail to celebrate my immediate boss and principal, Hon. Nyakno Uwemedimo Okoibu for finding me worthy at all times. I return this award to him. I celebrate My Father and Leader of our Party, Deacon Udom Emmanuel for the Dakkada philosophy/creed which contains motivating words that can spur up anyone to greatness.

I was once a common media boy, carrying old techno phones about. I served my term but desired more. The Dakkada creed inspired me to desire for a better state of life. I had to work on myself and develop on my abilities. Today the story different.

If our people could change from blackmails, character assassination, mudslinging, etc as a way to rise to the top and focus on taking all they have gained from this government to their units and wards, all these bickering you hear would not have been. But gradually, they will learn from us. Thank you for awarding me as a light bearer. May I not disappoint you and the trust and believe you have in me.

He also celebrated the tear rubber President of The Association of Student Doctors of Akwa Ibom Origin across the world and described him as a son under his tutelage who has accepted to be mentored by him. Greater days are ahead. He concluded.