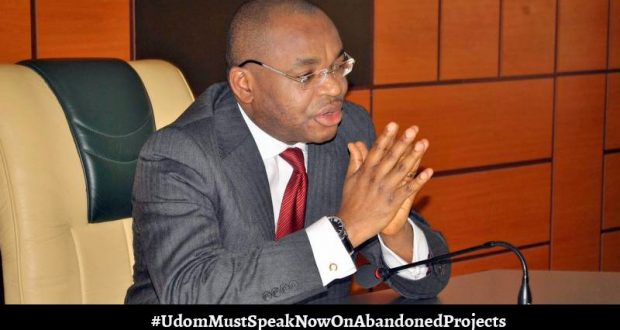 The perceived or imagined common political interest between the Akwa Ibom State governor, Deacon Udom Emmanuel and the Managing of the Niger Delta Development Commission (NDDC), Obong Nsima Ekere has reached a crescendo as it has succeeded in impeding development in the state.
Established on July 12th, 2000, by an act which repealed the Oil Mineral Producing Areas Commission Decree 1998 by the Senate, NDDC was expected to use funds received from the allocation of the Federation Account for tackling ecological problems which arise from the exploration of oil minerals in the Niger-Delta area and for connected purposes.”
The Senate in Part II of the Act listed the Functions and Powers of the Commission.
Section 7 (3) of Part II states inter alia: “The Commission shall be subject to the direction, control or supervision in the performance of its functions under this Act by the President, Commander-in-Chief of the Armed Forces of the Federal Republic of Nigeria.”
In Akwa Ibom State however, the commission seems to be presented with yet another master, other than the federal government and constantly criticised for allegedly awarding roads earmarked for mega developments by the state. For this, the state commissioner for Information and Strategy, Mr Charles Udoh once remarked “NDDC cannot come to this state to create a bushtrack where we needed a dual carriage way”. While many agree to a need for close collaboration between the state and the commission for a better organized development in the state, others have however alleged a feeling of insecurity on the part of the state governor whom they claim is intimidated by the overwhelming commendations already poured out on the current leadership of the NDDC, and worried such may further endear him to the people against 2019.
This ugly development has therefore created a strict face-off between the duo as the state government is seen to be engaging in hurried mobilization to sites occupied by NDDC, and in same manner, pulling out as soon as its succeed in dispelling its opponent.
Although strongly desiring the quick interventions by NDDC wherever they were allowed, communities across the state, especially those with severe ecological problems have been denied such interventions as the commission is no longer allowed to operate freely.
While the Akwa Ibom people were hoping for a better collaboration between the state and the interventionists (NDDC), to enable it continue to deliver its mandate to the highest oil producing state in Nigeria, Governor Udom Emmanuel, on a very odd occasion, dropped yet another bomb.
At the Security Summit for the South South states by the IGP Ibrahim Idris in Uyo, the governor who has been complaining of being restricted by dwindling resources issued an order, restricting the Niger Delta Development Commission (NDDC) from carrying out any intervention project in any of the nine Niger Delta states without the approval of governors of such state.
“Let me also use this opportunity that the MD of NDDC is here to state clearly that NDDC does not own even a piece of land. It is the governors that are in charge of land. NDDC should not enter any of the nine Niger Delta states to do any project without permission from the governors. When it is time for politics, we shall play politics”. He warned
To drive home its warning, the Akwa Ibom State government through the state Commissioner for Works, Mr Ephraim Inyangeyen, few days later, chased out contractors engaged by the NDDC to carry out an intervention on a 300 meter Youth Avenue, Uyo.
But members of communities across the state have taken up on the governor with a stern warning to stay off the activities of NDDC and allow the agency continue its very impressive interventions for the benefit of Akwa Ibom people.
First the address the issue is an indegene of Etim Ekpo, one of the Local Government Areas ravaged by activities of cultists, Barr Chris Okorie who expressed disappointment that the governor jeopardized an opportunity to lay bare the
2017-10-20
dozzier

Previous: Akwa Ibom, An Emerging Football Tourism Destination In Africa
Next: Address By The Speaker Of The Akwa Ibom State House Of Assembly