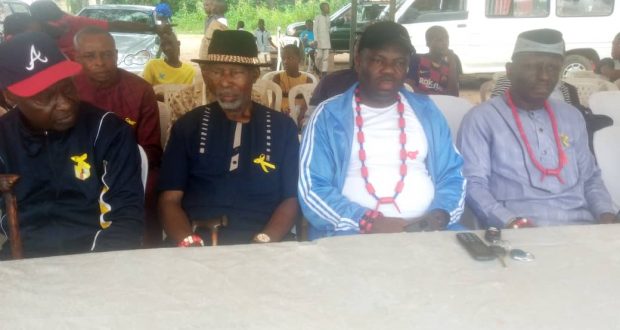 In what could be described as a pure display of talents of a keenly contested annual inter-house sports competition organised by Community Comprehensive Secondary school, Four towns, Uyo, pink house emerged the overall winner with 481 point, Red House came second with 470 point, while Yellow came third with 433 point respectively.

The 2021 edition of the competition held at four towns school sports ground, witnessed excited pupils and students from junior to senior classes who contest in various sporting activities.

Speaking at the event, the Principal General Mr. Aniedi Essien said sports is one of the essential outdoor curriculum for children, as it helps to enhance their academics and skills. Essien thanked the government for making sports a compulsory part of the schools curriculum to ensure that children hone their skills.

He stressed that he is fully in support of kids taking up sports as a career, because some of their destiny lies in sports as it will also help to groom them to discover and follow that path. He said.

“We are grateful to the state government for its enormous expenditure on her students especially for WASSCE fees which we know runs in million. There are three domains of education, the cognitive, the psychomotor and the effective, today we are here to showcase the psychomotor aspect of our education. Having know game and sports as been very lucrative nowadays, the school have decided to involved our students to show case their potentials.”

“As a school, we have repaired and renovated almost all the class room blocks, created a new staff room and furnished it with seats and tables to create a conducive learning environment. “

Earlier in his address, Chairman of the occasion, an alumnus of the school, the newly coronated Village Head of Atan Offot Community, Ete Idung Alfred Ekong, urged schools to continually engage pupils in athletics activities, saying such engagements do not only enhance learning but also inculcate leadership qualities in learners.

He explained that children needed positive avenues to direct their energies apart from academics, as it would help them develop physically, emotionally and mentally.

He noted that because of the opportunities in sports, government has invested hugely in the sector since sports was connected to youth development and could be used as a catalyst to create job opportunities, alleviate poverty and reduce crimes. He advised Students to shun act capable of trucating their academic pursuit most especially cultism.

The contests featured such activities as march past, 100m, junior and senior track race, 200m and 400m race, invitational relay, cultural dance and beauty contest, among others.

Highpoint of the event, was presentation of awards to some of the alumnus, donation of equipments, and presentation of prices /trophies to the competing schools. The colourful event which was held on Thursday, June 10th was attended by parents, friends, well-wishers and other guests, who participated in the invitation relay.

Previous: GOV. UDOM EMMANUEL: A Scammer in the Eyes of the Opposition
Next: I Run Very Transparent Govt~ Gov Udom Emmanuel …says all money spent is approve by AKHA