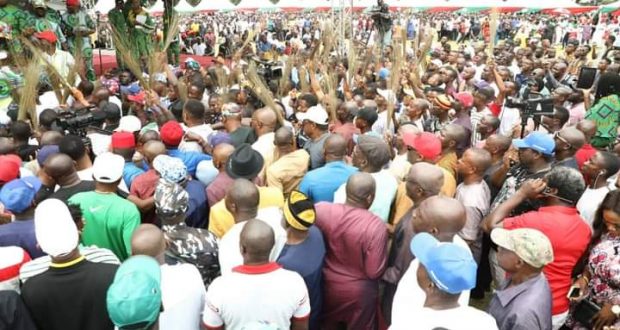 Peter Obi’s campaign is not a Biafran Agenda, but a National Movement

In a response, titled “Letter to a Brother” named Dapo, Amu-Nnadi stated that Nigerians are “massing for a change” because Peter Obi’s campaign offers them hope for a new nation.

Ostensibly responding to an assertion that Peter Obi represents a “Biafran” agenda, Amu-Nnadi stated that “Nigerian people have been pushed against the wall” and are fighting back.

“And they are not Igbos. They are not Yorubas. They are not Hausas. They are not Ijaws. They are neither majority tribe nor minority tribe. They are just angry, hungry Nigerians massing for a change because it has become personal and urgent and painful. Interpret it whichever you may, the hunger, the anger and the pain are palpable and for the first time someone offers hope, and not a fraction of some dubious wealth, to them,” the letter stated.

Believed to have been written to a former colleague in the old Daily Times who campaigns for Asiwaju Bola Tinubu, the full text of the letter reads:

Letter to a Brother

Nigerians are tired of nonsense. Nigerians are tired of the devaluation of their lives, beyond the Naira. Nigerians want something better. And so, this is not just a movement, it is a cry for help, and a resolve to take our destiny in our own hands, to save ourselves and save our families. And save this great country. I just drove around Port Harcourt, looking to buy fuel. None whatsoever available. Foodstuffs are too expensive. Housing is too expensive. School children are being denied their education. At 60, I have fewer years to live than I have lived.

Everywhere you look, there’s suffering, despair and poverty. Nigerians feel cornered by the dubious and decrepit ideology of Nigeria’s present democracy: of stealing everything and buying up everything, including votes and conscience. The Peter Obi movement is rousing, beyond any petty interpretation that may be founded on the rising fear in the establishment that this election won’t be contrived as usual, because Nigerian people have been pushed against the wall. They’re fighting back.

And they are not Igbos. They are not Yorubas. They are not Hausas. They are not Ijaws. They are neither majority tribe nor minority tribe. They are just angry, hungry Nigerians massing for a change because it has become personal and urgent and painful. Interpret it whichever you may, the hunger, the anger and the pain are palpable and for the first time someone offers hope, and not a fraction of some dubious wealth, to them. Those who would make excuses and offer protestations would do so. They are paid to do so. And as a student of history and a child of history, Biafra had a name for certain people. It was called ‘sabo’.

And beyond all that is the politics of injustice and exclusion being perpetrated and perpetuated against the South East. We fought a war, yes. Against what? Injustice. Even for a moment, the great Obafemi Awolowo understood why. And it is the kind still being waged even today, for which one reads the name Biafra here, spoken so slyly as though nothing and no damage was and is intended. As students of history, let’s have this argument. Every important part of this country has produced a President, except the South East. The only time a South Easterner was President he was ceremonial and the British supervised the elections.

What is wrong with us as a country, and what sin so grievous have the people of the South East committed that years after Obasanjo was president, even in this vice presidency of Osinbajo, people here and in many places fight and argue and insult others because a Yoruba man must again be president? And then there was Yar’adua and now Buhari. How daft do people really think Nigerians are? Do they not understand that we see beyond the sublime and crass postulations and posts here, to know that it is after all all too clannish? The kind that has brought Nigeria to her knees? A country where federal character, and not (simply) character, is the overriding consideration and policy of state?

And, dear Dapo, how daft some of us here are presumed, reading posts here that demonise a man whose history, source of wealth, parentage and educational background, as well as antecedents are known, because he dared to exercise his fundamental rights as a Nigerian to seek the highest office in the land? Just because he’s not part of any of the “favoured tribes”? And a man with failing health, and too many questions on everything a father should ask of a man coming to marry his daughter, is championed, just because he serves certain clannish considerations, both subtle and arrogantly displayed? Like, “so far as we are favoured, so far as it puts food on our table, the rest of Nigerians and Nigeria can go to hell.”

Please understand me, I do not begrudge your man his right to seek to be president. But he’s not strong enough, and his vision does not make enough socio-economic sense to earn my support. I’m a development economist and I have studied some of his best promises and how they must be funded. They’re more political than developmental, sustainable and strategic. It’s not grounded enough or detailed enough to pull Nigeria out of the mess we all, including you and your family, grapple with today.

And then, there’s a better candidate, one who offers hope that indeed it all can be better, to rebuild this nation and offer us all a Nigeria that meets our simplest needs and affords us the verve and impetus to dream and to believe in our dreams. A country that produces oil and gas that serve its people. A country that exploits its massive agricultural and aquacultural resources to feed its people. A country that taps into the immense human capital readily available to make it a force of human and material nature. A country that dares to assume its God-given stature and status as a giant. A Nigeria that reminds us that we are a proud people, because it fills us with pride.

Sadly, for a country of such immeasurable wealth and promise, hell becomes our reality. And there are too many people of questionable integrity in the corridors of power, as well as their enablers, who want to make it our heritage. This is our present reality, the underlying argument beneath the words typed and posted here; the memes, the lies, the whitewashing of sepulchres, the grandstanding and grandiose emptiness of logic.

You see, hope to a wounded spirit is everything money cannot buy. Delusion is the religion of those who think of others a god, and make themselves mindless followers, the kind that emboldened Hitler to war against a race. Despite the apostolic realities that these gods are nothing but naked of principles and morality. Despite the truth that whispers to us, away from the lucre, lure and limelight of social media and politics. Some day, we all will confess that truth. May we all here be alive then to bear witness. And may our children survive, even as this great country survives.