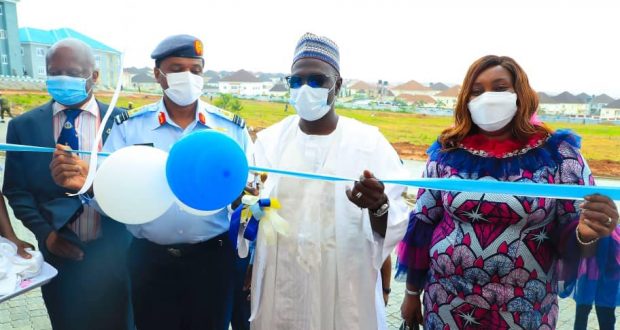 In keeping with its tradition of immortalizing personnel who paid the supreme price in service to the Nation, the Nigerian Air Force (NAF) today, 30 September 2020, named 10 newly commissioned blocks of residential accommodation after 9 officers and one airman for their sacrifices to their Fatherland. The 10 blocks of transit and married quarters for Officers and Non-Commissioned Officers (NCOs) at the NAF Bases in Asokoro and Bill Clinton Drive, Abuja, which were constructed by the Ministry of Defence (MOD) as part of its 2018 Capital Projects, were commissioned by the Honourable Minister of Defence (HMOD), Major General Bashir Salihi Magashi (rtd), pursuant to the Ministry’s efforts at providing qualitative and conducive accommodation for personnel of the Armed Forces of Nigeria.

Speaking during the ceremony, the HMOD, who was represented by the Permanent Secretary MOD, Alhaji Babangida Husseini, noted that the provision of befitting accommodation was part of the commitment of the Commander-in-Chief of the Armed Forces of Nigeria (AFN), President Muhamadu Buhari, to support the AFN and the NAF, in particular, to gradually and progressively attend to the welfare needs of officers and airmen/airwomen. While noting that welfare of personnel was critical to sustaining the operational successes of the AFN, the Minister stated that the wellbeing of personnel would continue to be prioritized in keeping with the Ministry’s unflinching commitment to ensuring operational efficiency.

The HMOD, who commended the Chief of the Air Staff, (CAS), Air Marshal Sadique Abubakar, for his efforts towards improving the living standards of personnel and the operational effectiveness of the NAF, pointed out that the laudable achievements of the NAF attest to the CAS’ relentless drive to reposition the Service into a highly professional and disciplined force.

According to him, “the medical outreaches by the NAF have made a tremendous impact on benefiting communities. The NAF remains a key component in the fight against terrorism whilst also providing Aid to Civil Authority across the country. Your ability to conduct operations in support of Government Ministries, Departments and Agencies at the peak of COVID-19 Pandemic, is indeed remarkable. No doubt your operations have saved countless lives and augmented Government’s efforts to reach out to vulnerable groups across the country”.

He again restated his appreciation to President Muhamadu Buhari for his unflinching support to the NAF and the entire AFN which had enabled such outstanding achievements. He added that the MOD, on its part, would continue to provide necessary support to enhance the NAF’s operational capacity to effectively discharge its constitutional roles.

Earlier in his welcome address, the Director of Administration (DOA) Headquarters NAF, Air Vice Marshal Gambo Pani, noted that the NAF had witnessed tremendous transformation over the last 5 years due to the visionary leadership of the CAS, which, while initiating significant increase in the NAF’s manpower disposition for more effective and efficient operations, also invested heavily in accommodation projects in NAF Bases across the Country. According to him, “the commissioning of these projects constructed by the MOD fits perfectly into the NAF’s aspirations for providing qualitative and conducive accommodation for its personnel.

The provision of these blocks of housing will alleviate the accommodation challenges faced by NAF personnel in Abuja”. The DOA also disclosed that the Service, under the current NAF leadership, had witnessed improved capability and professionalism cutting across areas such as heightened operational efficiency and aircraft serviceability to the levels required to effectively fulfil air power tasks demanded by national security imperatives. Others, he observed, include acquisition of new platforms, robust maintenance capabilities, capacity development across all specialties in the NAF as well as enhanced medical infrastructure and services.