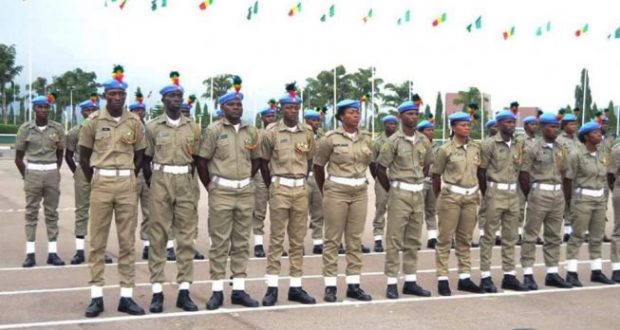 Following the refusal of President Mahamadu Buhari to accent to the bill seeking the establishment of the Peace Corps of Nigeria, youths in the country have vowed not to support his second term ambition come 2019 unless he rescind his decision.
In a release made available to newsmen in Uyo, the Akwa Ibom State Capital, the youths under the aegis of Concerned Nigerian Youths  maintained that President Buhari  is  insensitive to the plight of the youths in the country, and accused  him of playing politics with the much touted  employment policy of his administration.
The youths who wondered why a president who promised during his campaign to ensure that no fewer than three million youths are employed yearly could reject a bill which is working for such promise to be realised, stressed that except he rescind his decision, they will not support him.
It would be recalled that the national assembly has recently passed the Peace Corps of Nigeria Establishment bill into law, with the expectation that when the bill is accented to by the president it will drastically reduce the rising rate of youth unemployment in the country.
It could as well be noted that the Peace Corps of Nigeria has recruited no fewer than three hundred thousand youths across the country with offices in all the 36 States of the federation including Abuja.
Speaking to newsmen recently, the Akwa Ibom state commandant of Peace Corps of Nigeria, Patriot Anefiok Effiong, expressed disappointment over the non-accent of the bill by the President of Nigeria. He however, stated that even with the refusal, there is still hope for the bill as the National assembly has the power as enshrined in the constitution to veto the president’s decision.
He maintained that Mr. president might have been ill advised, noting that all issues raised by the president as reasons for not accenting to the bill were already trashed out by the national assembly during the public hearings on the bill.
While he called on the officers and men of the organisation not to be despair as there is still hope at the end of the day, he charged them to remain law abiding and continue to adhere strictly to the rules and regulations guiding their operations as Peace Corps in the country.
Also speaking to our correspondent, a legal practitioner, Barr Augustine Eze, expressed dismay over the refusal of the president to sign the bill and maintained that the president  was in a haste in taking such critical decision which he noted  bothers on changing the lives of thousands of youth in the country.
According to Eze, if the President had signed that bill into law he would have succeeded in capturing the support of millions of youths across the country. He added that he would not be surprised if his second term aspiration suffers a major setback due to his hasty decision.
He noted , “ Mr. President ought to have weighed the positive and negative sides of the bill and if need be set up a presidential committee to look into the bill holistically with a view to giving him adequate information before making his position on the bill known.
In a chat with our correspondent, a youth activist, Gabriel Damian, who described himself as an ardent supporter and believer in President Buhari, said he felt so disappointed when he heard about the decision of the president. He stated that his prayer was that the president would use the Peace Corps to also put his name on the sands of history as one of Nigerian leaders who has established an organization that provides permanent job opportunities to thousands of Nigerians.
Mr Damian, who mentioned such leaders to include General Ibrahim Babagida, who he said signed into law the bill that established Federal Road Safety Corps, and President Olusegun Obasanjo who signed into law the bill that  established Nigeria Security and Civil Defence  Corps, called on the president to have a rethink over his decision.
2018-03-06
dozzier