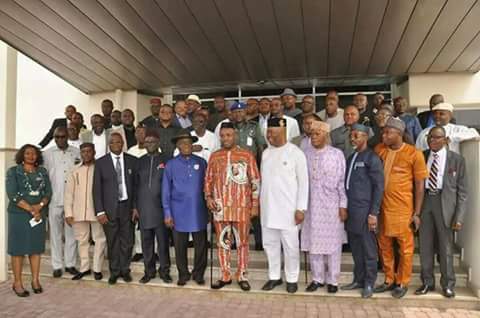 The National Legal Adviser of the Peoples Democratic Party (PDP) Barr.Emmanuel Enoidem has assured that the Party will reclaim power at the centre in 2019.
Barr. Enoidem who addressed journalists after a breakfast meeting of Stakeholders of Ikot Ekpene Senatorial District with Governor Udom Emmanuel at the Governor’s Lodge said, said that the present APC government has made several mistakes that the PDP would capitalize on to come into power in 2019. He urged party faithful to remain steadfast maintaining that, “PDP is on course, PDP is alive, PDP is the winning formula and it is going to take over power in 2019.”
“APC Government has made a lot of mistakes that we will capitalize on and win election come 2019. I want to urge every PDP member within the State and outside the State to continue to maintain faith with the PDP.”
Barr. Enoidem commended Governor Udom Emmanuel for remaining focused, dedicated to Akwa Ibom Projects and for steadily piloting the affairs of the State in line with the foundation laid by his predecessor.
“In the dying days of 2015, when a journalist asked Governor Akpabio what he will like to be remembered for after eight years as Governor of Akwa Ibom State. He said that he wants to be remembered as the Governor who produced the best Governor in Nigeria.
“Today on the account of what the Governor has enumerated in the meeting a while ago, it is very obvious that he is on course. The Governor is meeting the target of becoming the best Governor in the history of Nigeria after Godswill Akpabio.”
The PDP Legal Adviser lauded the immediate past Governor of Akwa Ibom State and Senate Minority Leader Godswill Akpabio for making a right choice in the person of Governor Udom Emmanuel as his successor, adding that the choice of Mr Emmanuel has answered the prayers of Akwa Ibom people.
According to him, “today, the elders of Ikot Ekpene Senatorial District are very delighted that Chief Godswill Akpabio was led by God to bring on board Mr. Udom Emmanuel as his successor.
“Every event that has unfolded since May 29, 2015 has demonstrated the fact that it was a wise choice and it was in line with the prayers of Akwa Ibom people that after Godswill Akpabio we should be able to have another Governor who will be focused, sincere, dedicated to Akwa Ibom project like Udom Gabriel Emmanuel is doing presently.
He further commended the Senate Minority Leader for providing sound leadership and expressed confidence that he would lead the party to victory in 2019.
“I want to thank the Senate Minority Leader for very eminent representation in the National Assembly. We want to tell him that come 2019, he will return to the Senate of the Federal Republic of Nigeria to continue to represent us and the State.
“I want to urge all that come May 29, 2019, he is going to lead the PDP to takeover power in Abuja because he has what it takes to lead the party to success come 2019,” Enoidem added.
2018-01-06
dozzier