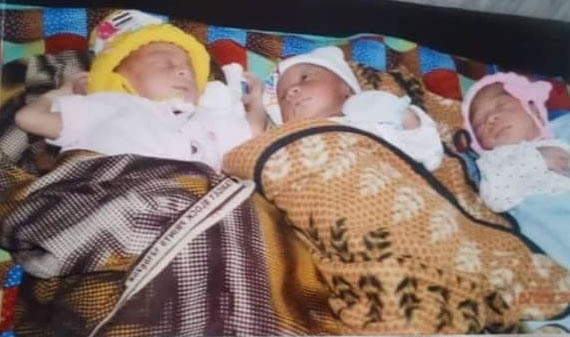 Parents of Newborn Triplets Cry for Help In Uyo

I’ve spent everything, I can’t even afford three pans of blood requested by doctors

Parents of newly born triplets, Mr/Mrs Anietie Daniel John have sent a passionate appeal to members of the public and the government of Akwa Ibom State to come to their aid.

Speaking with The Explorer, the father to the triplets Mr Anietie John, a native of Ikot Obio Atai in Itu LGA of Akwa Ibom State, said since the little stipends he gets as “a church worker is not enough” for him to foot the outrageous hospital bills as well as even get food for his wife, he “is left with no other alternative than calling for help from spirited individuals and the government”.

Speaking further, John said ever since the bundle of joy (the triplets) arrived on Thursday, 13th June, 2019, he has spent his all and gone borrowing.

John who said that but for the fact that his wife was taking her antenatal treatment at St. Luke’s Hospital Anua, Uyo, she would not have been attended to at the facility because of his inability to pay the initial deposit the hospital demanded of him since the wife was to give birth through Cesarean session.

He is appealing to spirited Nigerians to help keep his wife alive and well by donating to save the situation.

The mother and triplets can be visited at the said hospital.

Meanwhile, spirited individuals who wish to support the family could send their donation to this Bank Account: 3065353869 (FIRST BANK), Anietie Daniel John is the account name.

While the father Anietie is unemployed apart from his being ‘a worker in church’, the wife, Peace is a trained nurse but currently unemployed.