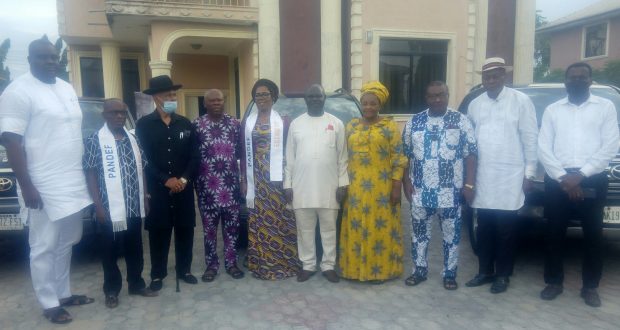 PANDEF Mourns Late Sen. Etang Umoyo …described him as an icon of no mean repute who lived an upright life

In a delegation led by the National Chairman of PANDEF, Senator Emmanuel Ibok Essien, on a condolence visit to the family, at his Uyo residence, PANDEF expressed sadness over the demise of late Elder statesman, stating that PANDEF and the people of Niger Delta region greatly benefited from the septuagenarian’s charismatic leadership and wealth of experience as a principled politician and nationalist.

“We are here as a mark of respect and honour to our departed State Chairman, having worked with him for decades, and can testified of his credibility,,Integrity and uprightness in his struggle for justice and egalitarian Nigerian federation. Senator Umoyo is a man who say yes and his yes is yes, a man who will walk away if things are not done the right way, a man who write and no one correct. He was a rare gem, a politician of no mean repute, who fought for the collective interest of his people.”

Senator Essien affirmed that PANDEF came to let the family know that the body is strongly with them in this moment of grief “No human being can comfort the family except God, it is not how many years you live, but the impacts you created, it would be difficult for Esit Eket and Akwa Ibom to forget the legacies of senator Umoyo. It is worthy of note that his legacies will stand forever. “

On her part, The Acting State Chairman of PANDEF in Akwa Ibom state, Obongawan Grace Ekong hoped that all who mourn Senator Umoyo will carry forward his legacy of unwavering dedication to the unity of Nigeria, even as the nation would fondly remember his contributions to peace, development and justice in the Niger Delta.

She prayed that God Almighty will comfort the family of the late senator and grant the soul of the departed eternal rest.

Also speaking, the State Organizing Secretary, Comrade Etifit Nkereuwem described the late Sen Etang Umoyo as a colossus, great orator, principled politician, erudite Scholar and strong advocate for justice and fairness. “He would be remembered for his outstanding & unwavering commitment to the course of the people, he was compassionate and revered leader with extraordinary courage to the service of humanity.

Senator Umoyo, aged 71, will be given a final obsequies on Friday, May 7th at government Primary School 1, Etebi Idung Assam, Esit Eket Local Governmen!t Area, and will be conducted by Methodist Church Nigeria.