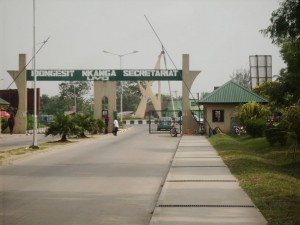 The inability of Akwa Ibom government to publicly announce the dissolution of the State Executive Council is used by some commissioners and special advisers against the smooth running of the government, investigation by Straightnews has shown.
During the swearing in of the re-appointed Secretary to the State Government, Dr. Emmanuel Ekuwem, Governor Udom Emmanuel assured that he would re-appoint some members of the ‘dissolved’ state executive council, indicating that he had relieved them of the appointment on May 29, 2019, the day he took oath for a second term in the office.
Investigation by Straightnews shows that most permanent secretaries are still answerable to the out-gone EXCO members in terms of payment of money, retirement of monthly imprest/other out-of pocket expenses and implementing some pending matters affecting them or their cronies.
Unlike in other states like Cross River, the state government has not ordered the out-gone commissioners to properly hand over to the permanent secretaries of the ministries they held sway. This may be why the appointees are still in possession of official documents and vehicles even after their sack.
A source close to one of the ministries said “It is surprising seeing this level of impunity by the outgone appointees. Some of them would call or send for the permanent secretaries and direct them on what to do or which payment voucher to give priority in terms of payment.”
“In a particular ministry seen as the mouthpiece of the state government, the immediate past Commissioner occasionally breezes into his office, sits down and sends for the permanent secretary to handle this or that for him,” the angry staffer complained.
Another insider narrated how “Even some of the permanent secretaries have been visiting their out-gone EXCO members in their houses to take instructions on what has to be done in their ministries.
“This action amounts to desecration of government. A governor was said to have told them that their tenure has expired, yet they still hold fort in the ministries even parastatals to the point of directing what to do or what should not be done. Since it is unclear who will return or not, the permanent secretaries are at their mercies.”
“Why can’t they allow the permanent secretaries who are chief accounting officers of ministries a breathing space to perform pending when they will be re-appointed? Does it mean that the governor will re-appoint all of them? Why are some of them so desperate to return to their offices? Can’t the governor appoint new persons to give fresh air to his administration?” he querried.

Previous: Parents of Newborn Triplets Cry for Help In Uyo
Next: The Media Should Showcase Achievements Of Udom Emmanuel’s Government – CLO Chair