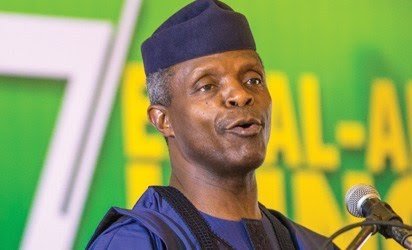 Arrangements are in top gear to receive the vice President of Nigeria,Prof Yemi Osinbajo, on a working visit to Akwa Ibom state.

National Witness gathered that the Vice President is expected to commission the Kings Flour Mill attracted to the state by Akwa Ibom state government.

The mill located in Mkpok, ONNA local government area is the biggest flour producers in Europe and its arrival in Akwa Ibom is yet another milestone recorded by the government of Governor Udom Emmanuel who promised the people industries that will create jobs and wealth for the people.

Addressing a cross section of Akwa Ibom people who gathered at the Banquet Hall ground to break a fast last Sunday, Governor Udom Emmanuel said past Nigerian leaders failed to build the economy of the country which explains why the country is facing the challenges of unemployment and poverty today.
He maintained that with more industries springing up in the state, the problem of unemployment and poverty will be addressed in the nearest future.
“Let me assure you that we are not resting until Akwa Ibom is fully industrialised. Anybody can construct roads but we are building the economy of Akwa Ibom state for the future through our industrialization policy.
“By the time we complete all our dual carriage thoroughfares, I will invite our President to commission them” he boasted.

It could be recalled that since the coming on board of Mr.Udom Emmanuel as governor in 2015, more than 12 industries have arrived and are operating in the state.