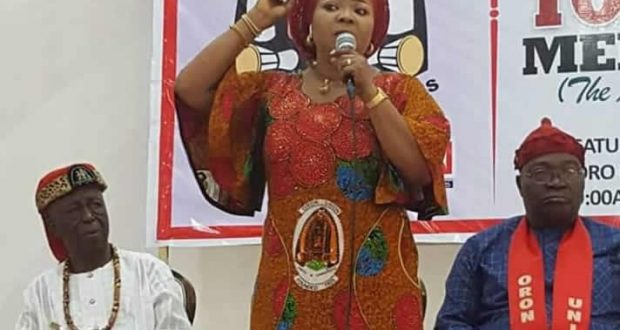 …Gets Vote of Confidence

By ANIETIE ESU
The President-General, Oron Union, Chief (Mrs) Janet Amba, has listed her achievements since assumption of office one year, nine months now, even as the people of Oro Nation have passed a vote of confidence on her superlative leadership and impressive performance, urging her to run for a second term in office.
Speaking at the town hall meeting of Oron Union on Saturday, at the Oro Civic Centre Complex, Oron, Mrs Amba highlighted the successes recorded so far by her administration to include clearing of the entire bush around the premises of the civic centre, renovation of Oro House with a modern hall design, lightings of the centre, setting up of a functional office with furniture and working equipment, provision of welfare for training of children and prompt payment of salary to all secretariat staff,reunification of Oron Union with other unions in the state.
Others include welfare packages for over 600 physically challenged people in Oro Nation, reconstitution of various interest groups of the Union as in Oro Think-Tank, Council of Elders, Oro Union Women Wing,Youth and the Students Wings, award of scholarships as well as payment of school fees to indigent students of Oro origin,  registration of candidates for Unified Tertiary Matriculation Examinations (UTME)
across Oro Nation, registration of Akpakip-Oro Seafood Traders Association with the Corporate Affairs Commission, among others.
The President of the apex body in Oro extraction frowned at the lack of unity, love and respect for leaders as well as the decline of “Afangki spirit.”
The administration of Janet Amba has been criticised by some people,including some members of her executive, because of her style of leadership.
But Amba has reaffirmed her stance on engendering a new narrative towards the growth and development of Oro Nation, saying she is proud of what she has achieved since assumption of office for about two-years now.
“We’re very proud of our achievements from December, 2017, till date.
” My focus is on the youth,” the first female President General of the 94 years old socio-cultural organisation in the State stated.
Recalls that in her inaugural speech at the early hours of Sunday, December 31,2017, Mrs Amba assured that her administration would passionately mobilised Oro people for the needed growth and progress of the area.
She noted that her victory was for the youth,Oro people and the girl child.
A communique issued at the end of the meeting reads in part, “That Oro people pass a vote of confidence on the leadership of Chief (Mrs) Janet Amba for her superlative and impressive performance.
“That in view of the mismanagement and decay of academic infrastructures in Methodist Boys High School,Oron, the School should be returned to the government to enable it benefits from numerous government intervention in public schools.
“That Oro Nation should facilitate the recall process of any political office holder who is not living up to expectation.This is to serve as a deterent to others to know that the offices they occupy are representation of Oro Nation.
“That the Union should facilitate an international press release to make known the myriads of challenges facing the Oro people to the entire world.
“That the Union should continue to advocate the need for government at all levels and its agencies to make provision for the reintroduction of a ferry services along Oron-Calabar waterways, to boost the economic corridor in the Niger Delta as well as reduction of insecurity challenges on our waterways.
“That Oro Nation appeals to both state and federal governments to commence work at the Ibom Deep Seaport and that in view of the establishment of the Seaport and its attendant benefits,Oro people should be conscious in sales of their land.
“That the Union should write a letter on behalf of Oro people to the National Assembly and the State Assembly to draw its attention to the deliberate delision of Oro, the host community from the official name that established Maritime Academy of Nigeria, Oron by the leadership of the Academy.
“That the meeting frowns at the attitude of some Oro leaders who were against the holding of the meeting.”
The Communique also called for the completion of East West road from Oron to Calabar and the need for equity, justice and good conscience in the governance of the State as there are three ethnic nationalities of Ibibio, Annang and Oro in the state.
Also discussed at the meeting was epileptic power supply to Oro and the poor socio-economic infrastructures.
Present at the town hall meeting were the royal fathers under the aegis of the Council of Oro Traditional Rulers (COTR),
Elders Council, Oro Think-Tank, Women, Students, Youth Wings of the Union, youth activists, student bodies of Oro extraction, members of Oro Unity Forum, market women as well as representatives of Oron, Udung Uko,Urue Offong Oruko,Mbo and Okobo Local Government Areas, Oron Union branches, physically challenged persons, among others.
2019-09-10
dozzier