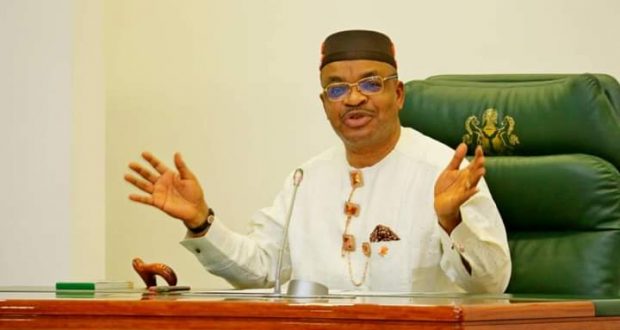 …to speak on relocation of Ibom deep seaport soon

Worried by non inclusion in the scheme of things by the Udom Emmanuel led administration, the second most famous pan-Oro and policy advocacy group in Oro Ethnic Nationality, “Oro Think Tank” has vehemently decried the constant and continued marginalization of the enclave by the present administration of Governor Udom Emmanuel in regards to the sitting of several key projects, industries as well as the constitutions of Boards,Agencies, Commissions and appointments.

In a communiqué dated February 13, 2021 and signed by Crown Prince Chris Abasi Eyo, Chairman of Oro Think Tank and former Commissioner for Information in the State, the group wondered and frowned effusively at the formula adopted by the Governor in the constitution of the State Universal Basic Education Board (SUBEB) and its contemporaries, describing it as lopsided hence, demands for equity, fair play and justice saying it was clearly intended to further ” give joy to other parts of the State while it heightens pains and sorrow in Oro Nation.”

The press release emphatically noted that appointments into Boards, Agencies and Commissions, on grounds of morality and fair play are usually graded, as a compass to government, to ensure that the different ethnic and political configurations of the State are taken into consideration in the distribution of these offices, citing the Federal Character Principle of the Federal Republic of Nigeria as a
clear pointer for ethnic inclusiveness and national cohesion and urged the Udom Emmanuel led administration to not only follow suit, talk about it but should be practised as “this was the case until 2007.”

Oro Think Tank appealed to Governor Udom Emmanuel to, for the sake of fairness and equity, resort to Federal Constituencies as the basis for the distribution of appointments and sharing of infrastructure in the State if he is not inclined to distributing political offices, infrastructure and industries, based on ethnic groupings which constitutes the State, stressing that anything short of this, will continue to result in the kind of lopsidedness and imbalance presently witnessed in the State.

The communiqué unequivocally feigned ignorance of the sharing formula employed by the governor saying, it’s definitely not based on Ethnic, Federal/State Constituency or Local Government spread as this “is why Oro ethnic nationality or Federal Constituency has not been proportionately represented in the full time Boards and Commissions in the State.”

It went further to accuse Governor Udom Emmanuel of not reckoning with Oro ethnic nationality or the Federal Constituency while making appointments as seen in the recent reconstitution of some Boards describing it as absurd for Oro ethnic group or political constituency to be conspicuously missing in the constitution of strategic and important Boards like the State Universal Basic Education Board, State Secondary Education Board, Akwa Ibom State Local Government Service Commission, Akwa Ibom State House of Assembly Service Commission and State Internal Revenue Service as according to it, someone from Oro should at least Chair one of the above mentioned Boards.

The press release highlighted that each of the ten Federal Constituencies in Akwa Ibom State ought to have taken a minimum of ten percent of all the appointments, ten percent of the Chairmanship and membership of the grade (A) Boards as well as other Boards.

It expressed dismay over the gross and disproportionate, unarguably negligible, clearly abysmal and painfully unfair representation of Oron Federal Constituency even if the Akwa Ibom State Civil Service Commission and the State Technical Schools Boards were added to the ones already mentioned above.

” More so, how do we explain the fact that the Akwa Ibom State Environmental Protection/ Waste Management Board has eleven (11) members and none is an indigene of Oron Federal Constituency ? ” The communiqué queried.

Oro Think Tank, done with the abysmal lopsidedness in the constitutions of Boards, Agencies and Commission bemoaned the lack of fairness as well as the clear and unwholesome marginalization of the enclave in the provision of infrastructure.

It linked the “politically motivated, economically untenable and ill advised decision to relocate the harbour of the Deep Seaport from the historically validated, globally acclaimed and professionally certified most suitable location at Ibaka in Mbo Local Government Area of Oro Nation still within Akwa Ibom State owing to the premeditated Reports of an obviously unprofessional Consultants as part of the counter productive agenda of marginalisation, economic deprivation and social emasculation against Oro People.”

The Tank Tank reserved its elaborate comment on the Sea port project, informing that the Technical Committee constituted by the leadership of Oro Nation for this singular purpose, is at work and will ” speak to the world at the appropriate time.”

The release harped on the non existence of a State government owned or promoted industry sited any where near Oro Nation or Federal Constituency and lamented the failure and slow pace of work at the dual carriage way from the Airport Junction through Nsit Atai to Oron, five years now since the commencement of work, describing it as unfortunately circuitous and unimpressive with no justification, wondering if it was a coincidence.

It advised, as a way forward, that Governor Udom Emmanuel as the father of the entire State should should urgently review his administration’s policy on political appointments, allocation of infrastructure and sitting of industries, to appropriately include Oro Nation and her people in the scheme of things in order to also give them a sense of belonging in the State, stating that “Oro people at the moment rightly feel marginalized, deprived, oppressed,alienated and dehumanised by the way they are treated in their own State” and expressed absolute confidence in Governor Udom Emmanuel redressing the anomaly towards proving that these errors are inadvertent.