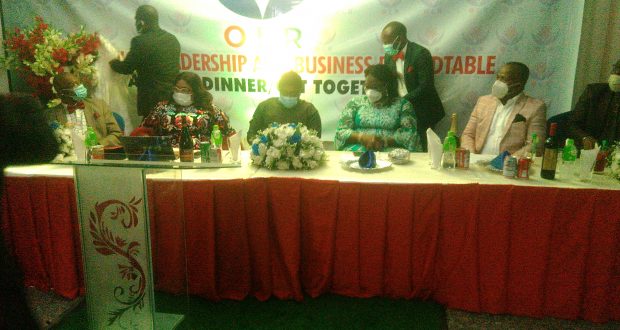 ” l want to appreciate the team. Not a large group. Few but solid. Few but dogged. Few but intelligent.You’ve been able to come together to form what today is distinctive. You can run with it. Don’t be discouraged but move on with one or two like minds. Mention it to others. After listening to the first two outing of the Roundtable online, l’m convinced that this is something different.You’ve been able to bring the image of Oro once again to the limelight.Congratulations!”
The former Minister who described the group as unique, visionary and purposeful stressed that it was not like the other organizations created by youths from Oro ethnic nationality but one which has put Oro name on both the top line and limelight and promised to support the Roundtable to attain its goals.
She expressed optimism in the group’s capacity to hasten the development of Oro through entrepreneurial development and focused leadership owing to the quality of members of the roundtable who “will cross-pollinate development bound ideas intended to push Oro forward,” describing the group as a bunch of intellectuals.

The Senator bemoaned her initial reaction which she said was erroneous when she first heard of the formation of Oro Nation Leadership and Business Roundtable confessing, it was because of the multiplicity of  money conscious socio-political youth groups but has since been proved wrong owing to the focus, tenacity, drive and purpose of the group hence, her decision to honour the group’s invitation.
Welcoming the guests,, Chairman of the occasion and MD/CEO of NADEKE Hospital, Dr. Bassey Ntekim said it was time to stimulate selfless and genuine leadership, enterprise and entrepreneurship in Oro.
Dr. Ntekim expressed confidence in the group’s quest to jointly engender industry through dialogue and ideas saying, it was the concrete way to go.

The former National Vice Chairman of The Nigerian Union of Journalists (NUJ) congratulated the Oro Nation Leadership and Business Roundtable Convener, Barr. Omen Bassey, describing what he has seen as appalling.He harped on the need for teamwork which he said he had imbibed from his Chairman while serving as the National Vice Chairman of NUJ.
Ikpoto Okon Osung defined  a mentor as a promoter who in most cases does not aspire to be promoted and informed that he left government 17 years ago but was still today very relevant because of his mentorship role.
Chief Osung who said a mentee does no wrong but can only be encouraged by the mentor revealed  that when you do not promote people above yourself, you’ll be stagnated, and promised he will continue to mentor people even when they fall below expectation or excel.
Keynote Speaker and Fellow, Nigerian Society of Engineers,  (FNSE) Engineer (Mrs) Vera Ntofon in her Dinner Speech on the topic, ” Reawakening the Spirit of Excellence”, defined excellence as doing common things in an uncommon ways and the quality of being extremely good in whatever one does and consistently doing what one does rightly, she emphasized will culminate   into excellence.

Engr. Ntofon informed that every one innately has the spirit of excellence but needs to be encouraged, helped, pushed and be assisted to attain excellence.
She said excellence and leadership are brothers hence inseperable, stressing the need for effective leadership, collaboration, partnership and teamwork if Oro must grow and develop.
Engr. Ntofon said it was imperative to be passionate in whatever one does, update oneself with contemporary information, knowledge, trends and discoveries  as knowledge changes over time.
” That you were unable to do a particular thing is no reason to not help or encourage others to do it. Don’t wave young people aside.Help them to achieve excellence. We must awaken them from their sleep. Give people opportunity to express themselves. Don’t shut people up.”
The keynote speaker harped on the need to positively influence other people, saying one who cannot be a positive influencer is not a leader.
Responding, the Convener Oro Nation Leadership and Business Roundtable, Barr. Omen Bassey, said he was moved by the enormous opportunities which abound in the private sector  and then the need to activate and  kindle enterpreneurship in Oro having understudied both the Jewish and Igbo nations to understand they thrive by being involved in the private sector as a way of surviving despite coming from minority races hence, the formation of the roundtable.
He said a 4/4 hectare of land had already been acquired for the construction of the proposed office of Oro Nation Leadership and Business Roundtable Cooperative Society to boost entrepreneurship in Oro and her people and solicited the support of Oro leaders.