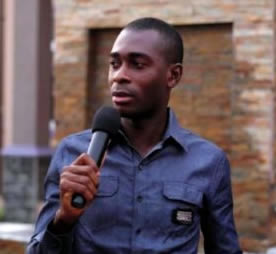 One Year After Police Arrest And Detention, The Ink Newspaper Editor Shows Gratitude

A year ago, yours truly was whisked away and sent to the criminal cell of the Nigerian Police Force Headquarters in Ikot Akpan Abia near Uyo, the Akwa Ibom State capital.

Recollect that reason for that arrest had since been tried and the matter ongoing at the Chief Magistrate Court 11 domiciled along FULGA Street, Uyo, Akwa Ibom State.

On the strength of the awareness that the case is ongoing in court in what the charge sheet reads State vs. Nsibiet John and sometimes Commissioner of Police vs. Nsibiet John, I will be reluctant to discuss that matter at the risk of being charged or say accused of subjudice.

But before I express my gratitude, it will be quite instructive to state that my travails today in the hands of the Akwa Ibom State Government, courtesy Mr. Moses Ekpo is clearly the price I have to pay in the line of duty as the custodian of the Editorial Contents of THE INK Newspapers.

Several other media practitioners have passed through this corridor of darkness. Many others will definitely pass through same and sometimes worse situations.

Sadly, some don’t live well to tell their stories, some don’t even return home alive. But here, I did not only experience the brutality, the rape, the emotional torture of police forces and Government, I came out to tell the story. I came out to breathe the air of freedom just twenty four hours after the police arrest.

For now, I may not wish to narrate the story behind the news, neither will I speak or talk about the undercurrent pinning that occurred while the whole drama lasted. My mission will be and it is for now to tender a note of gratitude, a song of gratefulness to all those who had a role or two to play in the matter at the beginning of it, even as it continue.

Firstly, God in heaven, the architect of the universe, the master key holder, the Omnipotent, Omnipresence and Omniscient deserves more than thanks. My mind was made strong by His hands. He saw me through the brutality. I thank our heavenly Father. He deserves all the glory.

Following from there, let me thank a woman magistrate whom I do not know. Madam, wherever you are, I am grateful. You refused to act against the law; you saw victimization and spoke truth to it. This magistrate did not know me and I do not know her till even this moment but the information that she refused to hurriedly accept to remand me in prison custody was adequately brought to my notice.

I honestly do not know her in person. But as a grateful Nigerian, I am here saying thank you. It takes guts and intellectual independence for a magistrate to look the authorities in the face and say …. No, I cannot do that, I cannot jail him, he has to be given fair hearing; I cannot ask that he be remanded in prison because I want to please you Sirs.

She said to the authorities, No, he could as well be my Son, brother and I will not be fair to the law, the constitution and above all God if I send him to jail on your demands and institutions.

Good people, you may be wondering why I took time to express the position cited above. I will explain. When I was arrested that fateful Thursday 5th January, 2017 amidst the protest, fuss and all the anger my arrest generated, the police, according to them, acting on instructions from above had during the day time approached a female magistrate and requested that I will be ‘nicodemusly’ sneaked into her court. The police, as I was informed, had told the woman that the government has directed that I be slammed, that I should be remanded in prison and then a long date taken so that I will be going to the court from the Prison.

I was to be denied bail and remanded in prison custody. But this woman whom I know not refused, saying if she must handle the matter, the offence is ‘bailable’ and due process must be followed. Let me not bore you with some other things she said, at least, I have mentioned some above.

This is a woman I don’t know. But she chosed to do the right thing. Does she not deserve commendation? Oh yes, she does. Madam, once again, I greet you, I thank you. You are my worship that is worth commending and emulating. I pray God to double your license of jurisprudence.

As I put pen to paper on this message of gratitude, I am not unaware of the problems this kind of notes usually cause. It is simple, ability to recollect all those who stood by me. In this case, it becomes very difficult to start listing names. This is rightly so because, the whole state, Nigerians, foreigners stood by me. The call for Free Nsibiet John, Release Nsibiet John was simply waoooo. I could not have asked for more solidarity.

The religious institution led by my Pastor, Reverend Ibup Emah of Qua Iboe church, Oku, 112 Ikot Ekpene road, former CAN chairman, AKS, Arch Bishop Cletus Bassey deserve special appreciation. Many more Christian leaders still call to find out the status of the matter, assuring that their prayers remain with THE INK and all of us.

Also, traditional institutions were not left out. They contributed positively and immensely towards the freedom I enjoyed and I am enjoying today. My fathers, mothers may your throne remain and may your Royal Majesties and Highnessess live long.

I am still humbled. Away from political parties, top citizens of Akwa Ibom State did not show restraint on the call for my release. If I want to mention names, I will miss out so many. But my leaders, please be assured that I remain very grateful to you all. You staked your offices, risked your positions, all for me, just me. I am grateful.

Now, I move to the learned gentlemen. These groups of professionals showed class, they showed that the legal practice in Akwa Ibom is top of the class. On that date, Barr. Ewa Okpo led his colleagues Ita Duke, Inibehe Effiong, David Augustine to the magistrate court to argue for my bail where I was granted by chief magistrate Emmanuel Archibong. These guys were fantastically intelligent. I am right over the moon with you learned gentlemen. Gratias. I am not forgetting the role Civil Liberties Organization played. Thank you great CLO led by Clifford Thomas

Now, I had to serve this, the best you may say for the last, the media community, my colleagues, my friends, my loved ones. The team # Release Nsibiet John, team, I stand with Nsibiet. Team Free Nsibiet. Me alone. My people, yes, you of course released so many hash tags for me. I am grateful. The International media who reported this, the national media, the state media, electronic media led by Inspiration 105.9 fm, Planet fm, radio Nigeria, NTA, the list is endless. Yours truly cannot say thank you enough. If thank you enough is Enough, I will bring it in trailer loads.

Inspiration fm, Uyo, you guys rocked. You handled the matter as if I was one of your major staff. My prayer is that your station and stations shall never experience drought.

Still on the media, I salute my contemporaries, I salute my predecessors, I salute my junior Colleagues. Having you as professional colleagues in times when that happened proved to me that I could go to bed with both eyes closed. And with you all, I could go to war and have my back being watched over.

The Nigeria Union of Journalists led by Elder Patrick demonstrated persistent unity in calling for my release. I am happy to belong to this family. Even though sometimes I become prodigal, it is for the love of the job.

None journalists who shouted for me. IT students across all the media organizations. Those who don’t know me but join in the call for my release, I pray may God cause people to stand for you when you least expected. I am told a story of some young ladies whose relationship were threatened because of the way and manner they took up the matter. Their spouses thought they had one or two things to do with me. But then nothing have we ever done together, that way round. I think you know ba? But they were my defenders. God bless you girls. I jealous your solidarity.

Gentlemen and ladies, please believe me when I tell you I love you, I appreciate you. I mean every bit of those words. The support I enjoyed, the goodwill I received and the commaderie was waooo. Nobody to the best of my knowledge had received such before.

Before I end this piece, let me thank my brother and friend, Osondu Ahirika. He signed the surety that took me out of captivity. Osondu, you are a brother and a good one at that.

In the final analysis, I thank my family, my landlord in Uyo, my friends and loved ones. Everyone that played a role or two and more. It is me saying thank you. Thank you again, Esosongo ……ooooo. Yak Abasi idiong mbufo.

Lastly, what happened a year ago, for me was not the end of the world, it wasn’t the end of my journalism practice. It is a thing we must face as journalists, a price we must pay for propagating information. “Nnyin iyam urua iko”.

And on this note, trust me, neither myself nor any staff of THE INK Newspaper including the team that backed me bear grudges. We have since moved on. Whether there was a conspiracy, a compromise or a sellout anywhere, we do not know. All we know is that Akwa Ibom people, the media, scholars, legal practitioners, everyone stood by us and we did it.

We survived it. Our gratitude remains. And our loyalty to the course of truth is intact. Our commitment to what we believe in is total. We shall remain on the path of the people. On our honour, we shall continue with our objectives of balanced, fair and objective reporting.

We shall continue to defend the truth at all times.

For the Police and His Excellency, the Deputy Governor of Akwa Ibom State, Mr. Moses Ekpo, we hate you not. Thank you everyone. I am the Editor all of you loved and I live perpetually in gratitude. Let’s do it again together this year. Welcome to 2018. Matt., 10:26