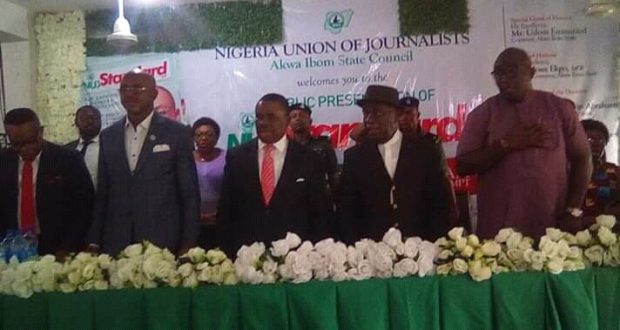 It was a gathering of cream de la cream among members in the pen profession as the converged today at the prestigious NUJ secretariat, information driver, Uyo for the launching of the first edition of NUJ standard magazine courtesy of Amos Etuk leadership.

Unveiling the magazine for members of the public, the number two citizen in the state, who led the state delegation, Mr. Moses Ekpo (MFR), in his address commended, the current leadership of Amos Etuk administration for initiating the idea to engaged the members, express satisfaction with the speed at which the union adopt in the discharge of its duties and commended the editorial board for credibility.

“I urged the editorial board of this magazine to aim at serving as a means of promoting the unity of Akwa Ibom state, demonstrate the ideals of fairness, balance reportage and strong contents which is the paradigm for progressive and developmental journalism media in the world over “.

Addressing journalists, the Chairman of the occasion, His lordship, justice, Godwin Abraham, the State Chief Judge, explained that journalism is effective tool for good governance because of its synergy between the government and the people, the legal jurist, harps on independency of journalists, adding that it will help to make reports factual and objective, he said journalism should not be a commodity sold to higher bidders but a tool for societal developments.

On his part, the State chairman of the union, Comr. Amos Etuk, said the union is committed to all Akwa Ibom journalists, and seeking ways of helping them compete with their contemporaries any way in the country, he disclosed that under his watch, seven Traning have been concluded for journalists in the state with more formidable ideas coming on stream.

Etuk used the occasion to congratulates, 3 journalists, Ekemini Simon of the Mail Newspaper, Edidiong Udobia of weekly insight and Dianime Uko of inspiration FM for being among the 108 journalists shortlisted in the country for investigative Traning by the international center for investigative reporting (ICIR) in Abuja.

Among dignitaries who grace the occasion where, Director-General of the AKBC – Comrade Anietie Ukpe, topclass teacher of Mass Communication at the State owned Polytechnic and PRs maestro – Mr Udeme Nnana, Permanent Secretary, Ministry of Women Affairs and former Chairman NAWOJ – Mrs. Margaret Edem, former Director, Ministry of Information and Communication expert – Comfort Umanah, Permanent Secretary Ministry of information and all past Chairmen of the union amongst others.

Previous: AKSU Radio Receives License for Operation
Next: We Are Set for An Exquisite Estates in A’Ibom ~ Arc Nya-Etok