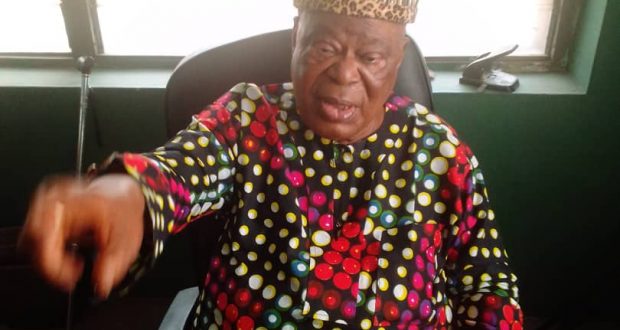 Stakeholders of the forth largest ethnic group in the country under the umbrella of the apex Socio-Cultural Organisation in Nigeria, the Akwa Esop Imaisong Ibibio have called on their people to disregard rumors making the rounds that Governor Udom Emmanuel is set to meet with them within the week to lobby for Obong Bassey Inuaeyen as the next Ntisong Ibibio, which if it happens they will advise against.

Reports have been rife online that the Governor is interested in the choice of the Chancellor of a socio-political organization in the state, Obong Bassey Inuaeyen as the next Ntisong Ibibio.

Addressing newsmen in Uyo on Sunday at his residence, the spokesperson for the organization, Mkpisong Cyril Ekiko said he would respectfully with all amounts of humility advise the Governor against involving him self on the issue of Ntisong which will contradict the laid down procedures, rules, and constitution of the organization.

“I’m not against the change of baten of leadership in any organisation but that must follow due process, my grievances is that Akwa Esop Imaisong Ibibio should be allowed to exist cooperatively so that we can reform and bring back the glory of ‘Ibibio Union’, which is the labour of our Hero’s past that should not go in vain, Governor Udom Emmanuel is very close to me and I can tell you that he has the interest of Ibibio progress at heart”.

Earlier, in a press release published on behalf of the organization, the group had passed a vote of confidence on the incumbent Ntisong Ibibio, Engr. Essien Ekidem, against the impersonated publication of Monday, 29th December, 2020 by a local tabloid in the state.

“Therefore the Council completely dissociates itself from the publication in its entirety. Let it be emphasized that Akwa Esop Imaisong Ibibio is a Socio-Cultural Organisation and Non- partisan. The writer of this falsehood did not cross-check facts before going to the press. For the avoidance of doubt, the Mkpisong Council and members still count on the leadership of Ntisong Essien Ekidem.

“Members of Akwa Esop Imaisong Ibibio and the general public are advised to disregard the misleading information”.

Speaking further, an erstwhile lawmaker in Uyo Federal Constituency and renowned stakeholder in Ibibio land, Obong Okokon Etuk, popularly known as Emco pleaded with Governor Udom Emmanuel to give his necessary support to Ntisong Essien Ekidem as done to other ethnic groups by their governors, like that of the Ohaneze of Igbo Land and Afenifere of Yoruba Land.

He called on people to respect the office of the Ntisong Ibibio and avoid any act capable of abusing the highly respected organization in the state.