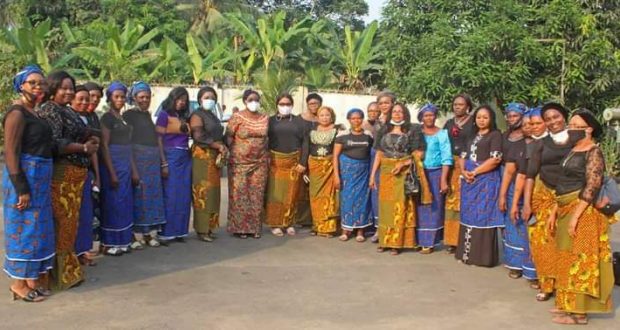 As eminent Akwa Ibom sons and daughters both within and in diaspora continue to pay glowing tributes to the family of Late Air Commodore Otuekong Idongesit Nkanga (rtd.), a conglomerate of women stakeholders in Nsit Ibom Local Government Area on Sunday registered their condolence to commiserate with the family over the demise of their political leader.

The women stakeholders which compromises of female political appointees, female councillors, party women leaders both at the ward, chapter and state level were at Ikot Nya, the country home of the deceased in Nsit Ibom Local Government Area.

Leading the delegation, Mrs. NsikakAbasi Eric Akpan, wife of the Executive Chairman of Nsit Ibom Local Government Council stated that the news of the demise of Otuekong Idongesit Nkanga came as a sad news to the good people of Nsit Ibom and Akwa Ibom State at large.

Also speaking, Obongawan Deaconness Aniedi Inyang, PDP State Officer extolled the exemplary administrative prowess of the late icon stating that his unprecedented legacies will remain evergreen in the minds and annals of governance in the state.

On her part, Her Excellency, Deaconess Funmi Idongesit Nkanga, Wife of the deceased expressed satisfaction and optimism towards the love, affection and solidarity displayed by the women of the area in their quest to console with the members of the family over the irreplaceable loss of her dear husband.

A minute of silence was observed for the late Political leader led by the council vice Chairman, Hon. (Deaconess) Oto Aaron, while Prayers for the bereaved family was taken by the Immediate past Governing Council Chairman, AKSCOE Deaconess Regina Ikpatt.