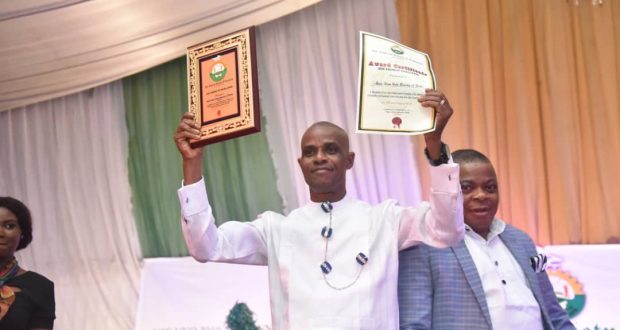 The Chairman of the Nigerian Society of Engineers, NSE, Uyo Branch, Engr. James Amiang, FNSE, has scored the Governor Udom Emmanuel led PDP Administration high for what he described as, the giant strides in the area of road construction across the State.

Engr. Amiang made this known while interacting with newsmen during a combined inspection tour of Road projects by members of the NSE and Ministry of Works officials led by the Honourable Commissioner for Works, Mr Ephraim Inyangeyen. The joint inspection was part of the NSE’s “Tech-Innovation 2019” with the theme, ‘Local Content Innovations in Engineering for Sustainable Economic and Industrial Development of Akwa Ibom State.

Engr. Amiang specifically commended Governor Udom Emmanuel for the revolution of Roads in his home town of Etinan, stressing that, this will not only transform the area but attract considerable development to the town.

He said the NSE was committed to partnering the State Government and the Ministry of Works in particular, to actualize the vision for a greater Akwa Ibom and lauded Commissioner Inyangeyen for his dexterity in learning and grasping the finer details of engineering and
performing brilliantly as Works Commissioner. Engr. Amiang said the NSE will always give support and advice where neccessary to the Ministry in their operations.

On why the Ministry did not shy away from the scrutiny of the NSE, Mr Inyangeyen said, the Ministry of Works had nothing to hide and have always insisted on maintaining world best practices in the area of engineering while considering or executing it’s projects.
Inyangeyen pledged the Ministry’s willingness to continually collaorate with the NSE to achieve the best results for the good of the state.

In a related development, the Nigerian Society of Engineers (NSE) Uyo branch, has honoured Commissioner Ephraim Inyangeyen, as, The Best Engineering Services Administrator in Public Service, in recognition of his impressive contributions to the infrastructural and industrial renaissance of Akwa Ibom State

Engr. Amiang while conferring the honour to the Honouree’s observed that, the NSE was honouring those who have contributed immensely to the growth of Engineering profession and supported the umbrella organization for the Engineering Profession in Nigeria, over the years.

Engr Amiang specifically thanked the Akwa Ibom State Government and Ministry of Works, their support which made the first ever Exhibition Conference hosted by the NSE Uyo branch since its establishment thirty four (34) years ago a successful and historic event.

The “Tech-Innovation 2019” Conference, was declared open on Wednesday, 7th August at the Ibom E-Library Complex, IBB Way, Uyo.The programme which featured Lectures, Exhibition, Technical Session, and award presentation among others was well attended by prominent Nigerians in the public and corporate private sector.

Previous: A’ Ibom Govt To Construct A New Bridge In Mbiaso Community.
Next: Methodist Primary School gets School desks from Rotary Club of Uyo Metropolis