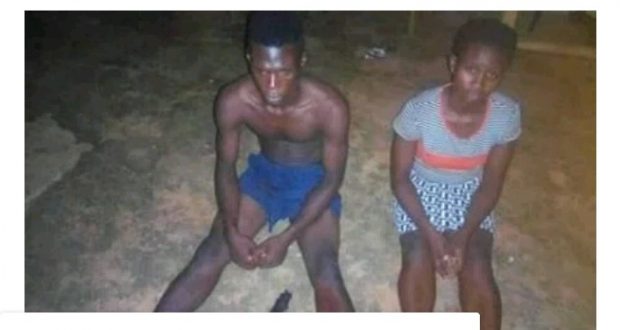 A female armed robber and her accomplice, who have been terrorising Abatete community with robberies and other heinous crimes were nabbed by the Anambra State Police Command on Thursday.
Parading the suspects, spokesperson of the command, Haruna Mohammed, said that on Thursday, following intelligence report, Police detectives attached to Eziowelle Division in conjunction with Abatete vigilante group arrested duo namely,
(1) Ifeoma Joy Ugegbe alias “Sabath” ‘f aged 20 years and,
(2) Ifeanyi Chinweze alias “cheplat” ‘m’ aged 19 years both from Oranto Ukpo in Dunukofia LGA of Anambra State.
Exhibits recovered from the suspects include one cut -to -size single barrel gun loaded with a cartridge .
The case is under investigation after which the suspects would be charged to Court for prosecution.

Previous: 30 Nigerian students bag US government scholarship award
Next: Miyetti Allah to herdsmen: Remain where you are and defend yourselves.