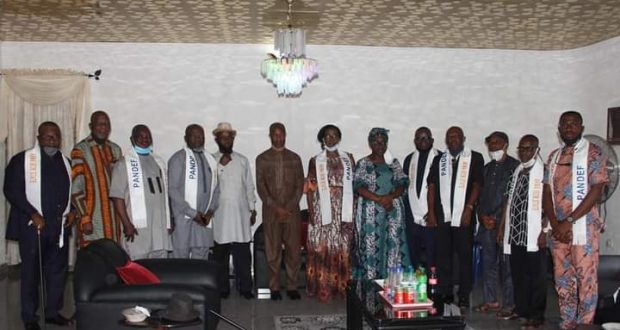 NKANGA WAS A PATRIOT OF NO MEAN REPUTE- PANDEF

The Akwa Ibom State leadership of Pan Niger Delta Forum (PANDEF) has described the Late Otuekong Idongesit Nkanga as a patriot who, at every point in time, fought against injustice for the overall interest of the Niger Deltans.

This was disclosed by Distinguished Senator Etang Edet Umoeyo, the Akwa Ibom State Chapter Chairman of the forum at Ikot Nya on Saturday during a condolence visit to Her Excellency Deaconness Funmi Idongeist Nkanga and the family of their National Leader in Nsit Ibom Local Government Area.

Until his death, the Late Otuekong Idongesit Nkanga was the National Chairman of PANDEF.

Speaking, Distinguished Senator Umoeyo stated that the forum had received with rude shock and disbelief the demise of their National Leader which is a great loss to the entire Niger Delta for whom he served as the National Chairman of the forum, a position they noted was reposed on him on total confidence to chart a new course for the region.

He acknowledged the exclusive and exceptional wealth of experience Late Nkanga brought to bear in the course of running his administration which today, he stressed has brought for the people total freedom from political doom.

“Our late iconic leader was a man of proven integrity who painstakingly fought for the right of all the Niger Deltans most especially for unrepentantly advocating for the in resource control of the region as most states under the religion are oil producing states which they suppose to control their resources and restructuring of Nigeria to guarantee peaceful coexistence as the current structure has failed to guarantee the country’s progress.

“Our departed leader left some unfinished works especially in the area of his unrepentant advocacy for resource control, fiscal federalism and restructuring of Nigeria for equity, peace and justice. And the best way we can immortalize his name is indeed to mark those unfinished work and continue there,” Umoeyo said.

He also added that His Excellency Otuekong Idongesit Nkanga’s positive contributions to the emancipation of making Akwa Ibom State what it’s today started when he served as the military head of state under the Ibrahim Babangida military rule which saw the advent of Idongesit Nkanga Secretariat and other laudable projects he executed, which today has stood the test of time in the annals of the state.