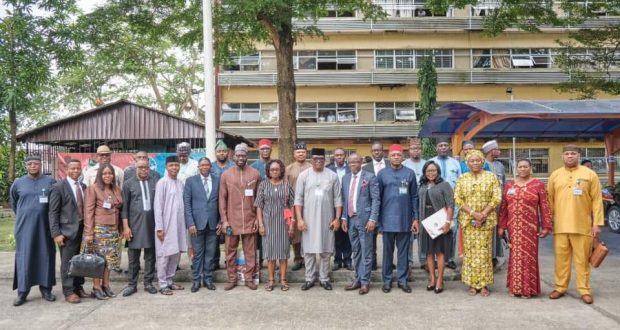 The Akwa Ibom State Government has advanced inventiveness, statesmanship and strategic execution of public projects as some of the reasons responsible for the success so far recorded by the administration of Governor Udom Emmanuel.

The Commissioner for Information and Strategy, Comrade Ini Ememobong gave the indication Wednesday, during a fact finding visit to his office by the participants of Senior Executive Course 44 of the National Institute for Policy and Strategy Studies (NIPSS), Kuru.

Ememobong, who was represented by Permanent Secretary in his ministry, Akparawa James Edet, maintained that Akwa Ibom now ranks very high as a destination for investments and tourism.

“Akwa Ibom is a very peaceful state, and it is also considered a home by people of practically every other tribe in Nigeria”.

“Through ingenuity, good leadership, and superior performance, the Governor has been able to bring to the state of reality the concentrated imagination of all the things that represents good governance”. He said

While identifying strategic continuity of viable projects as a means of sustaining good governance, Ememobong drew his analogy from the Akwa Ibom Airport, which was initiated by the administration of Obong Victor Attah, and subsequently improved upon by successive administrations to the extent of becoming a home to Nigeria’s first ever state owed airline, Ibom Air, a signature project of the administration of Governor Udom Emmanuel.

In his remarks, Brig. Gen. C. F.J Udaya MNI (Rtd) Secretary/Director of Administration, NIPSS and leader of the delegation, intimated his host that his team members were in the state, specifically the Ministry of Information as the mouthpiece of the state government, to obtain first-hand information about the administration of local government areas, especially the challenges, options and opportunities of local governance in the state.

Accordingly to the retired Brig. Gen., “The choice of Akwa Ibom as part of our tour around the states of the South-South region was not without a purpose. The decision was borne out of the good things that we have studied about your state “. He disclosed.

The team leader on behalf of his members, comprising hierarchy personnel of the Nigerian Army, the Nigerian Air force, the Nigerian Police Force, Directors and Permanent Secretaries in both federal and states’ ministries, solicited for information materials and collaboration that would further assist his group in their research on local governance, which outcome, he said would form the basis for policy direction on local government administration at the level of the Presidency.

The visit featured presentation of mementos, and interactive session where questions on various sectors of the state were raised by the course participants, and answers were duly provided by the host.

The theme for the 2022 Study Tour is: Local Governance in Nigeria, Strategy, Challenges, Options and Opportunities, and the visitors are members of the Study Group III .