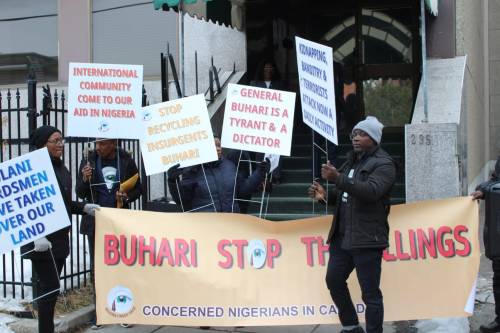 Nigerians In Canada Protest Against Buhari Government Over Insecurity

Nigerians in Canada have express their worried on the level of insecurity in the country, the group make this known through a protest against President Muhammadu Buhari’s administration, describing it as a failure over unfulfilled promises made to citizens.

The group asked Buhari to immediately resign from office following the rising spate of insecurity and poverty in the country.

According to the group, the administration of Buhari had failed woefully in protecting Nigerians and creating avenues for economic empowerment for the people.

In a statement by Convener of the group, Olujimi Adekanle, and addressed to House of Commons Government of Canada, Catholic Archdiocese of Canada, Amnesty International among others, Concerned Nigerians in Canada disclosed that they embarked on the protest to expose Buhari’s failures to the world.

The statement reads, “We want to register our fears and utter disappointment at the leadership and government of President Muhammed Buhari.

“Events and heart-breaking happenings in our country as a result of gross incompetence of the Buhari administration can no longer be tolerated judging by the humongous negative effect they are having on our nation.

“We unequivocally submit that Buhari’s government has failed in all departments of governance and he has become nothing but a puppet in the hands of his cabal.

“The recent infighting between the National Security Adviser, General Monguno (retd), and Buhari’s Chief of Staff, Abba Kyari, is a signal that all is not well with Nigeria’s security system. Buhari has totally lost it. The statement further read.

They called on well to do Nigerians to support the quest for good governance and assured that the protest will continue in major cities in the world if the president fail in his primary responsibility of protecting life and property.