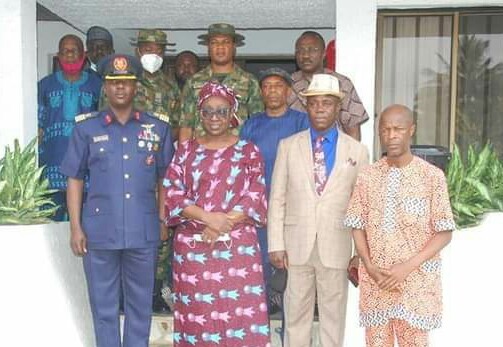 Led by Air Vice Marshall Mfon Ekpoh of the Nigerian Air Force and flanked by Group Captain AB Sule, Commander 305 SMG described the late Akwa Ibom erstwhile governor as a fallen hero who was a great patriot and formidable commander with an exceptional leadership prowess during his reigns in the military.

AVM Mfon Ekpoh stated that the demise of Otuekong Idongesit Nkanga is a great lost to the Nigerian Air Force, the military, Akwa Ibom State and the society at large after painstakingly recalling his numerous selfless sacrifices, contributions and quota to the growth and development of the country most particularly in Nation building.

On her part while responding on behalf of the family, Her Excellency Deaconess Funmi Idongesit Nkanga expressed gratitude to the Nigerian Air Force family which she described as a noble profession for sharing and sympathizing with the family of the deceased in this time of grief.

Otuekong Nkanga until his demise on December 24th 2020 was the Director General of Governor Udom Emmanuel’s Divine Mandate Campaign organization 2015 & 2019. He was also the Chairman of the Ibom Airport Development company and Ibom Air.