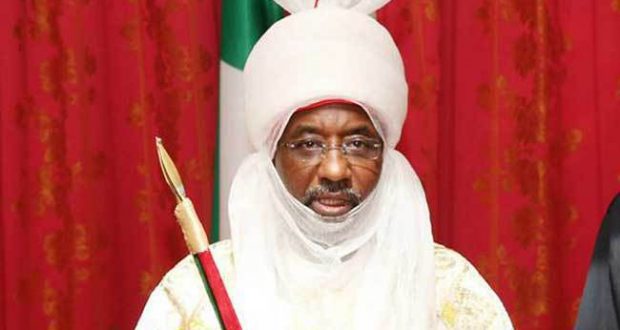 Nigeria on the verge of bankruptcy — Emir Sanusi

The Emir of Kano, Muhammad Sanusi 11, on Tuesday declared that Nigeria is on the threshold of bankruptcy following unfavourable economic policies such as subsidising petroleum products and electricity tariffs.
The former Governor of the Central Bank of Nigeria, who spoke during the ongoing 3rd National Treasury Workshop organized by the office of the Accountant General of the Federation, holding in Coronation Hall, Government House, Kano, advised President Muhammadu Buhari’s Administration to cancel subsidy on petroleum products and electricity tariffs if the economy must stabilize.
According to him: “The country is bankrupt and we are heading to bankruptcy.
“What happened is that the Federal Government do pay petroleum subsidy, pay electricity tariff subsidy, and if there is rise in interest rates, Federal Government pays.
“What is more life-threatening than subsidy that we have to sacrifice education, health sector and infrastructure for us to have cheap petroleum?
“If truly President Buhari is fighting poverty, he should remove the risk on the national financial sector and stop the subsidy regime, which is fraudulent.”
Emir Sanusi insisted that Buhari must tell Nigerians the fact about the economic situation and also act quickly on it because the nation is already bankrupt.
According to him: “Since I have decided to come here, you have to accept what I have said here.
“And please, if you do not want to here the truth, never invite me.
“So let us talk about the state of public finance in Nigeria.
“We have a number of very difficult decisions that we must make and we should face the reality.
“His Excellency, the President, said in his inaugural speech that his government would like to lift 100 million people out of poverty.
“It was a speech that was well received not only in this country, but worldwide.
“The number of people living with poverty in Nigeria are frightening.
“By 2050, 85 per cent of those living in extreme poverty in the world will be from the African continent.
“And Nigeria and the Democratic Republic of Congo will take the lead.
“Two days ago, I read that the percentage of government revenue going to debt services has risen to 70 per cent.
“These numbers are not lying.
“They are public numbers.
“I read them in the newspapers.
“When you are spending 70 per cent of your revenue on debt servicing, then you are managing 30 per cent.
“And then, you continue subsidising petroleum products and spending N1.5 trillion per annum on petroleum subsidy!
“And then we are subsidising electricity tariff.
“And maybe, you have to borrow from the Capital Market or the Central Bank of Nigeria to service the shortfall in the electricity tariff.
“Where is the money to pay salaries?
“Where is the money for education?
“Where are other government projects?”
The Royal Father lamented that for 30 years, successive governments have had this project called petroleum subsidy, insisting that this is the right time to stop it so as to save the nation’s economy.
Speaking during the workshop, the Accountant-General of the Federation, Ahmed Idris, noted: “The overall objective of the workshop is to promote accountability and transparency in all facets of the nation’s public finance and management architecture.
“It is expected that participants should appreciate that accountability and transparency remain major watchwords for prudent financial management practices and are, therefore, major prerequisite for economic growth and development.”
Idris charged participants to strive towards identifying the challenges to accountability and transparency the management of public funds, improving independent revenue base and profile of government, as well as proffering revenue diversification for governments at all levels so as to cut down the cost of governance.
In his address, the chairman of the Economic and Financial Crimes Commission, Ibrahim Magu, identified corruption as the bane of the country’s economic woes.
He warned public and private office holders to desist from corrupt practices, stating that his office has zero tolerance to corruption.
According to Magu: “Transparency and accountability are twin sisters of good governance.
“They are the tools to tackle corruption.
“It is true that we can leave a good legacy.”
Magu, however, called on the Federal and States Accountant-Generals to take the lead in the fight against corruption, adding that they must insist the right thing be done in their offices.
In his address, the Kano State Governor, Dr. Abdullahi Umar Ganduje, who was represented by his Deputy, Dr. Nasiru Yusuf Gawuna, said Kano State was the first to establish the Treasury Single Account in its bid to fight corruption and block leakages.
According to Ganduje, the state also put in place the Anti Corruption and Public Complaint Commission to checkmate corrupt practices of public servants in the state.
The Nation.