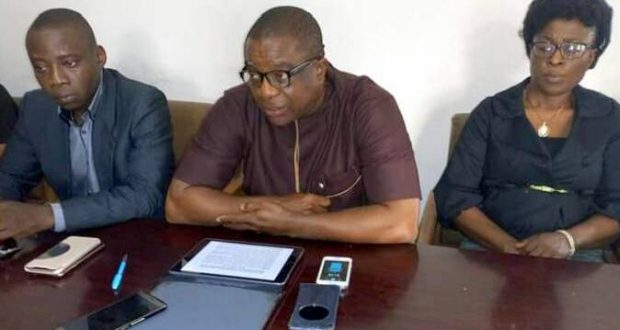 The Cross River State branch of the Nigeria Medical Association has declared that its members will from on Monday, January 8, 2018 stop working if their colleague and former state chairman of the assocaition, Dr. Ekanem Usang who was kidnapped December 26, 2017 is not released by then.

The Chairman of the association, Dr. Effiong Mkpanam, stated this Friday after an emergency meeting of the association in Calabar, the Cross River State capital where he alleged that a total of five doctors and three of their dependents or family members have been kidnapped.

Mkpanam who expressed dissatisfaction at the trend said that: “As we address you today, it is with grief that we make public the fact that a very Senior Medical Practitioner and one time Chairman of NMA has been in the kidnappers den for ten days and counting.

“As doctors, we swore an oath to save lives of members of the public who are in need of our skills. We have observed with dismay a dangerous trend in which the security and lives of the same doctor is being threatened by some disgruntled members of the society.

“The NMA in Cross River hereby instructs all its members, both in public and private medical facilities, University of Calabar Teaching Hospital, Federal Neuropsychiatric Hospital, Institutional Hospitals, General Hospitals, Mission Hospitals and others to withdraw their services.

“They are to observe a total and indefinite withdrawal of services to members of the public until such a time that our colleague is safely released by his captors and measures taken to forestall future occurrences.

“It is noteworthy that in 2017, within Calabar alone, five doctors and three of their dependants and family members were kidnapped at various locations“ Mkpanam said.

The News Agency of Nigeria (NAN) reports that the kidnappers had established contact with the family and demanded a ransom of NGN100 million which has been reduced to NGN20million.

And, Mkpanam wondered how much the salary of a doctor was monthly that will call for such a ransom, and disclosed that: “From what we heard from the family; the victim was with his ATM cards when he was kidnapped and all the money in his account has been withdrawn.

“For the avoidance of doubt, the NMA in Cross River will withdraw clinical services without any notice, any time a doctor is kidnapped in future. We cannot continue to save the lives of others while ours is not secured’’, he said.

This comes two weeks after a Surveyor (names withheld) was kidnapped on Christmas eve in his residence in Calabar and later released after the ransom was paid.

Weeks earlier, on November 28, 2017 a suspected kidnapper was roast to death by an angry mob at four miles in Calabar after an angry mob chased and hacked the alleged kidnapper to death while other members of the notorious group were beaten to stupor and handed over to the police.

A four man kidnap gang had tried to abduct their victims; two children along Parliamentary extension road when their mother was taking them to school and they ran out of luck when one of the kids began shouting and these made residents chase them down alongside men of the Federal Housing Division of the Nigeria Police who came in later.

The mob got to one and hacked him to death while the police officials are said to have prevented the second from being hacked to death and drove him away.

Previous: Politics of Truth in the Akpabio/Udom Matrix
Next: Petrol Price Stays At N145, Says Kachikwu