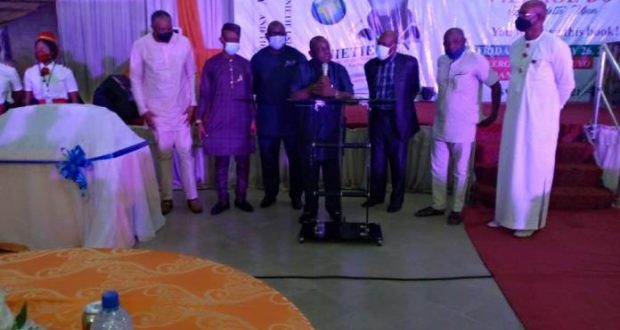 Nigeria, one of the populous African countries, is said to be on its knees due some challenges facing her.

Ray Ekpu, a one-time Chief Executive Officer/Editor-In-Chief of Newswatch magazine, stated this at a book launch, Village Boy written by Anietie Usen in Uyo, Akwa Ibom State on Friday, said some people have ganged up to bring the country to its knees.

Ekpu, a frontline journalist and a one-time world-acclaimed editor, lamented that some leaders especially politicians have brought hoodoo on Nigeria.

”Politicians have brought down Nigeria. The country was not like this. I was born at a time the country was worth it and people were proud to belong to Nigeria. As a young person, I got three admissions into three universities.

”I did not lobby. Nobody lobbied for me. The admissions came due to my good results. After accepting an offer to one of the universities, the Federal Government then awarded me scholarship. Today, the story is different. I got what I got based on excellence. Anietie joined Newswatch because of excellence. He wrote an article published by Thisday newspapers,” the famous journalist said.

According to him, ”One day, he visited Nyaknno Osso, our librarian. When he wanted to go, Osso wanted him to come and greet me. I was with the late Dele Giwa, the then Editor-in-Chief of the magazine. He sent a note ‘Dear Ray’ and I was surprised that my junior used my name. When I saw him, I took him to Giwa.

”We were excited seeing him because we read his article and decided to employ him. After a brief introduction, we told him to come for a letter on Monday. When he showed up, we gave him a letter of employment.

”When civil war broke out in Liberia, we decided to send Anietie because we saw him as a smart person. Two journalists in other newspapers were killed in Liberia but Anietie went and came back. He reflected this in his first book: Audacious Journalism. He got two promotions in a year. This was done not because he came from Akwa Ibom like me but because of he was a product of excellence.

”Unfortunately, today in Nigeria there is no excellence. Everything is done on the basis of ethnicity and language. I want young people to rise up and fight against ethnic and language bigots. Rise up and fight for equity and for justice in this country,’’ he narrated.