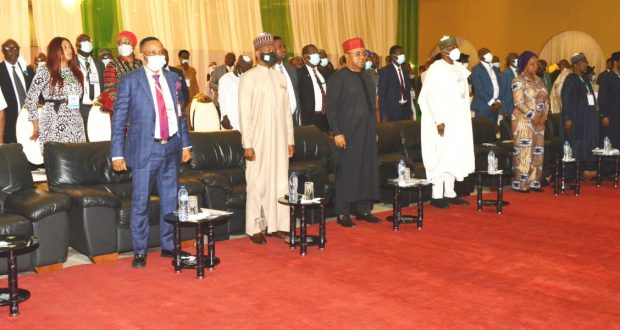 President Muhammadu Buhari has restated the need to strengthen collaboration between the Ministry of Niger Delta Affairs (MNDA) and Niger Delta Development Commission (NDDC) as part of government’s efforts at building a new and better Niger Delta region.

President Buhari, who was represented by Minister of Transportation, Mu’azu Jaji Sambo, stated that this was imperative towards realizing government’s mission of improving the living conditions of the Niger Deltans and the Region.

President Buhari was presenting a keynote address at the opening ceremony of a two-day top management retreat of the Ministry of Niger Delta Affairs and Niger Delta Development Commission at the State House Banquet Hall, Presidential Villa, Abuja.

He declared: “This retreat would serve as a veritable platform that will provide a unique opportunity to correct whatever irregularities had existed in the past and thereby attain an effective and prosperous working relationship that will be for the best interest of the Niger Delta region and Nation at large.”

He reiterated that “the Federal Government has made huge commitment in the Niger Delta region, in furtherance with its desire to give the people a new lease of life, taking proactive steps to responding to the issues of the region, adopting and implementing more prudent policies and programmes that will bring about a better region.”

While commending the efforts of the ministry at helping to reposition the NDDC to ensure it delivered on its mandate, the President stated that the implementation of the forensic audit report has commenced in phases and would soon usher in a new management and board for the NDDC.

Acknowledging the importance of the ongoing East-West road project to the nation’s economy, President Buhari reassured that the project would be completed before the end of the present administration.

He expressed optimism that the retreat will bring about the repositioning of NDDC to work amicably with the ministry to promote team work and build better understanding between the organizations.

He therefore called on all participants “to take advantage of the retreat and come up with resolutions that will galvanise both the ministry and NDDC towards breaking new frontiers in their mandate to develop the region.”

Earlier in his welcome address, Honourable Minister of the Ministry of Niger Delta Affairs, Umana Okon Umana, declared that “the Ministry requires collaboration and coordination among the agencies, development partners and other stakeholders to achieve its mandate of developing and transforming the region.

Umana stated that the ministry will prioritize projects prosecution and payments by focusing on impactful projects in the area of security, health, education, water, roads and other sectors that will address the basic needs of the people of the area, adding: “We would set benchmarks and timelines for projects delivery. Our vision is to make a difference in the development of the region.”

The minister stated that the mission of changing the narrative in the region would be realized when the NDDC and MNDA work together “in one accord and focus on the core mandate of both institutions, in the spirit of one government.”

Umana commended President Muhammadu Buhari and Niger Delta stakeholders on his mission to fast track the rapid development of the Niger Delta region, by assigning specific achievable deliverables to the ministry, adding that part of reinventing the Niger Delta would require new strategies and different work approaches.

The Minister of State of Ministry of Niger Delta Affairs, Sharon Ikeazor, expressed gratitude to President Muhammadu Buhari and the Federal Government, as well as the ministry, NDDC, all development partners and stakeholders “for their unwavering commitment and support towards up lifting the quality of life in the region.”

PIX 2: The Hon. Minister and Minister of State having a discussion during the management retreat of MNDA/NDDC at State House, Abuja.