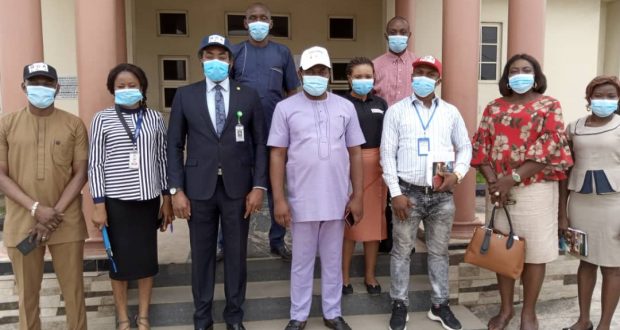 Uyo Local Government Council has expressed its readiness to partner with the Neglected Tropical Diseases (NTDs) unit of the State Ministry of Health to support coordination of NTDs activities and create awareness about the diseases.

The Council Chairman, Dr. Uwemedimo Udo stated this when he received members of the NTDs Unit, led by the State Coordinator, Dr. Aniekeme Uwah who paid an advocacy visit to his office at the council secretariat.

Addressing the health officials, Dr. Udo reiterated the commitment of his administration to ensure a better healthcare delivery for the people of Uyo and expressed his commitment to partner with the unit in areas that will help to eliminate these diseases from Uyo Local Government Area which is reported to be endemic for three of the seven diseases that account for the 90% of the burden of NTDs.

The Chairman also pledged to reach out to other stakeholders to partner the NTDs unit in checking the spread of these diseases in Akwa Ibom State.

The diseases are called neglected because they tend to affect the world’s poorest and have received less attention than other diseases. They blind, disable and disfigure people, taking away not only their health, but also their chances of staying in school, earning a living, or even being accepted by their family or community.

Earlier in his address, Dr. Aniekeme Uwah commended the Uyo Council boss for giving priority to health projects in just few months in office despite the limited resources at his disposal and urged him to sustain the tempo.

Dr. Uwah, who is an epidemiologist stated that NTDs cause the loss of 57 million disability-adjusted life years and loss of up to 534,000 lives annually with over 100 million Nigerians being at risk for one or more NTDs.

He noted that NTDs can be controlled or even eliminated through mass administration of safe and effective medicines or other effective interventions.

Since 2012, 31 countries have eliminated at least one NTD. Although, Nigeria has made significant progress, some implementation targets are yet to be reached or have only received suboptimal coverages.

The World NTD Day, marked on every 30th January is a day set aside to create awareness on Neglected Tropical Diseases (NTDs) and the theme for this year’s world NTDs day was #endtheneglect. #beatNTDs.

Highpoint of the visit was the conferment of the NTDs Ambassador in Akwa Ibom State on the Executive Chairman of Uyo to assist in the advocacy and resource mobilisation for combating NTDs.