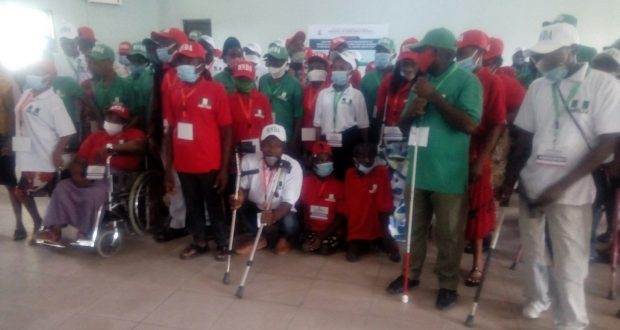 The Niger Delta Development Commission (NDDC) has concluded a 3 day training on detergent production, Liquid soad production, business skill and empowerment of 92 people living with disabilities in Amayam Clan, Ikot Ekpene LGA, with a call on the trainees to practice what they have learnt, contribute to food security, build capacity in their communities and run profitable enterprises which will engage other men, women and youth’s.

Put together by Community Development and Education Department of the Ministry of Niger Delta Affairs in partnership with some Consultants and representatives like Rt. Hon. Nsikak Ekong of Ikot Ekpene/Essien Udim/Obot Akara Federal Constituency, it had persons on crutches, wheel chairs, the blind, dumb, deaf, cripples and those generally living with disability and deformity of any kind.

Speaking at the Closing Ceremony, Minister of Niger Delta Affairs, Senator Godswill Akpabio who said it was a pleasure and great honour for him to identify with those living with disabilities, stressed that the training programme was intended to teach them how to fish rather than just giving them fish, which he said, had regrettably, been the practice.

In his words “I have no doubt that you had the finest of resource persons and facilitators during this program. You were equally provided with a conducive learning environment, including appropriate nutrition and place of
rest and recreation, for proper assimilation of knowledge, I can say the sky is not just your limit, but your starting point. It is my greatest hope and desire that no sooner than we can imagine, you too will become established enough to contribute towards the training
of other men, women and youths in the district, state and indeed the country for the enhancement of their value, thereby making them more useful to themselves. My challenge to you today is to go and do something, anyhow and in anyway, do something. If you cannot fly, run. If you cannot run, walk. If you cannot walk, crawl. If you cannot crawl, roll. If you cannot roll, just shift.” Akpabio advised.

Represented by Mrs. Bibiana Udoh, a Senior staff in the Ministry of Niger Delta Affairs. The Minister said the commission was committed to improving positively on the lives of people of Niger Delta area, as the training was aim at making them self reliant.

She said that the starter packs would be a boost and a driven force for them to make more resources for better living. “Physically challenged persons have their methods and unique character; when you show them love and encouragement, they are ready to put in their best.” She said.

On his part, a Consultant from Sim Business World Ltd, Mr. Maxwell Kelechi Onyekwere harped on the importance of such training, stressing that his organisation will continue to partner well meaning individuals and government departments towards sustainable development and thanked the Minister for his love and foresight, describing him as people-centric.

Chairman of person with disability
Mr. Sunday Enang who was visibly elated, commended NDDC for organising such a programme, noting that the gesture had given the physically challenged people a sense of belonging in the oil producing region. He advised his colleagues to put what they have learnt into practice, to enable them create Jobs instead of being job seekers.

“We should do the right thing out there so that we can add value to the society. I thank NDDC for putting smile on our faces. This is the first of its kind and we are looking forward to the second batch,” he said. The programme which began on Monday, February 8, was held at Sam Law Hotel, Uyo.