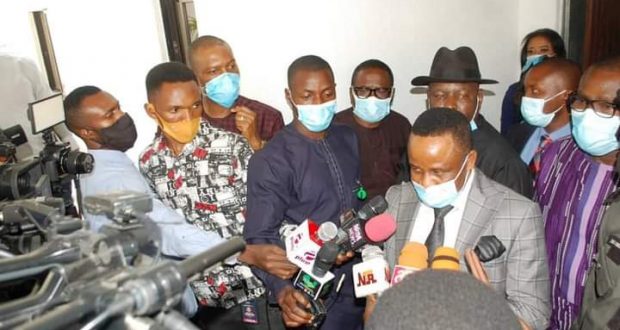 The Ijaw National leader and Chairman of Pan-Niger Delta Forum (PANDEF), Chief Edwin Clark has appealed to the youths and other stakeholders of the Niger Delta region to give the Interim Administrator of the Niger Delta Development Commission (NDDC) Mr Effiong Akwa, a chance to execute the mandate handed over to him by President Muhammadu Buhari.

Chief Clark made the appeal when the Interim Administrator of the NDDC paid him a courtesy visit in his residence in Abuja on Wednesday, January 13, 2021.

The courtesy call which witnessed the traditional presentationtation of kolanuts from the host, attracted journalists from the print, electronic and online genres.

While receiving the NDDC boss, the Niger Delta leader recalled that Mr Akwa was not the first Sole Administrator of the NDDC and wondered why certain persons should make a fuss about his appointment. He noted that in the past States like Bayelsa, Rivers and Delta had at some points produced Sole Administrators who ran the interventionist agency and appealed to all to support Mr Akwa to succeed.

He warned against any act by persons that tended to give a bad impression about the Niger Delta region as restive and urged the people to rally round the Interim Administrator to bring developmental projects to the region, noting that it is only in an atmosphere of peace that development can thrive.

Chief Clark frowned at a situation that the NDDC Act was breached through the appointment of the last disbanded board. Going memory lane he recalled past Chairmen of the board of the NDDC which appointments followed the alphabetical order of the NDDC States and insisted that it was the turn of Delta State to produce the next Chairman of the board as stipulated by the Act establishing the Commission.

Chief Clark praised the appointment of the Minister of Niger Delta Affairs, Senator Godswill Akpabio and said the former Governor was a proven performer as the Governor of Akwa Ibom State and urged the Minister to bring to bear his developmental acumen in the Niger Delta region.

Earlier Mr Akwa had informed the Niger Delta leader that his appointment was borne out of necessity being the most Senior Director so as not to create a vacuum since the Court had ordered the disbandment of the Interim Management Committee of the Commission.

The Interim Administrator appealed for the cooperation of the stakeholders in the ongoing forensic audit of the Commission being the mandate handed over to him by the President to see through.

Mr Akwa thanked the National Assembly for the support he has received since his appointment especially the passage of the budget of the Commission. He said the Commission had concluded the payment of scholarships to her overseas scholars, completed the NDDC headquarters Complex which he said would soon be commissioned by President Buhari.

He reeled out several interventions that the NDDC would embark upon including educational and agricultural projects and said these could only be achieved through the cooperation of the people of the region who have borne the brunt of underdevelopment over the years.

The Interim Administrator was accompanied by senior staff of the Commission and aides cutting across the States of the Niger Delta region.

Previous: Nyakno Okoibu: Triggering exceptional governance through electrification and housing development.
Next: NKANGA WAS A PATRIOT OF NO MEAN REPUTE- PANDEF