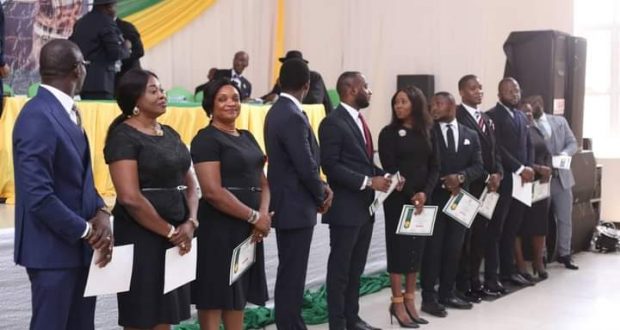 A fresh dynamics for the upscale of thought leadership in the Nigerian Bar Association Uyo Branch was made today, June 30, when the all young new Exco of the association were inaugurated in a lit ceremony.

The new Exco saddled with the responsibility of piloting the affairs of the association for the next two years were sworn in by Hon. Ntong Festus Ntong in line with the 1999 constitution of the Federal Republic of Nigeria and the association’s constitution, in affirmation with the tenet of the law.

Issuing the Certificate of Return to the elected officers, the Chairman Election Committee of the Association, Barr. Ekanem Ekanem applauded the NBA Uyo Branch for the confidence and trust reposed on the officers to serve the bar, he charged the officers to see the mandate given them as an avenue to serve and to create positive mark in the bar.

Earlier, the outgoing Chairman of the association, Elder Aniema Etuk in his valedictory speech noted that though his administration was mostly challenged but there were still remarkable impact made following the support and cooperation of members. He called on members of the association to lend their support to the new Exco so the association can record massive exploit.

In his inaugural speech titled ‘putting Uyo Bar First’, the newly sworn in Chairman, Barr. Ememobong Nicholas Udoh thanked learned members, previous Exco and the electoral committee of the association for the responsibility given him and his Exco to serve, noting that such decision will translate to the collective accomplishment of realistic goals of the bar branch.

Udoh said, ”our branch has accomplished great things before a new day dawns. I’m confident that we can do great things again, in unity, solidarity and focus on the greater good, all for the love of Uyo Bar.”

While thanking Elder’s Forum of the association for paving the way for the growth and development of younger generation of lawyers within and outside the branch, Udoh appealed for support to ensure that the coming months is precedented by all the lofty ideas he’s penned down for the progress of the association.

He added, ”in the coming months, let’s craft a new service charter based on some ideas I championed in my declaration of intention and manifesto documents and your ideas too. Let us rebrand the Uyo Bar and remake bar advocacy so that we can be more relevant to the society.”

In his goodwill message, Former Vice Chancellor of the University of Uyo, Prof. Enefiok Essien charged the new Exco to ensure the mandate given them is judiciously used especially in the area of members welfare prioritization, creating reciprocity between the bar and bench and ensuring prompt leadership and proactiveness is brought to the fore in consolidating on the gains of the previous administration.

The Commissioner for Justice and Attorney General of Akwa Ibom State represented by Mrs Mfon Edemekong congratulated the new Exco and tasked them to inject innovations and policies that will change the bar branch for good.

On his part, Desmond Yama, former NBA chairman, Unity branch Abuja lauded the Uyo Bar branch for carving a significant portion as the third or fourth branch in NBA.

Yama who explained that the space of the legal practice was shrinking, charged the new Exco to look beyond the vista of the practice by not taking for granted other areas like sport, entertainment and legal construction as there were lot of untapped opportunities lying waste there.

National Publicity of the Nigeria Medical Association, Dr. Aniekeme Uwah, in his goodwill message said that young people have the energy and dynamism to deliver, noting that NBA Uyo Branch was set for greater things with the crop of elected officers. Dr. Uwah tasked the new Exco to make everyday of their administration count.

Also speaking, Francis Ekwere Esq. hinted that Uyo is the capital bar and seat of government, therefore must be engaged constructively to deliver.

On her part, One-part time chairman of the Uyo Bar branch, Enobong Akpan Esq. said she was thrilled by the crop of new lawyers elected to serve in the association. She pleaded with them to see the mandate as a call to serve and must therefore avail themselves for service at all times.