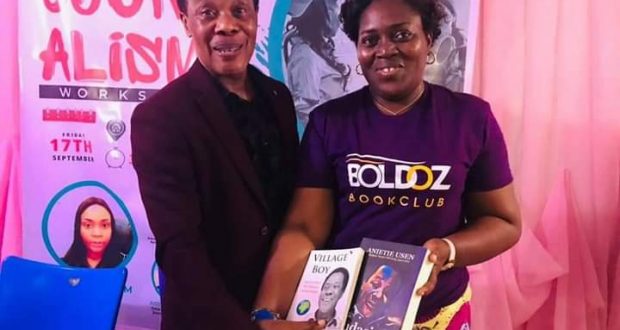 Comrade Ekong made the appeal at a workshop put together by the Female Reporters Leadership Programme (FRLP) held on Friday, September 17, 2021 at Royal Arts Academy in Utang Lane, Uyo, Akwa Ibom State.

Speaking on “Mainstreaming Women Issues in the Media”, Uduak Ekong observed that women journalists as advocates for female inclusivity and participation should tell more stories about fellow women and their exploits.

“Women are generally afraid of going to the media. When you have a reason to seek people’s opinion after an event, the men readily approach you to be interviewed, while the women shy away. But when you allay their fears and guide them on what to say, you’ll discover that women do always have lots to talk about. So, we need to help our fellow women come out of their shells”, she said.

“Women should start talking about women. If 5 women in this place decide to write about a particular outstanding woman for instance, we’ll automatically bring her to limelight and that’s the visibility we’re talking about”, she added.

Hosted by Imaobong Dem of Inspiration FM radio, the Workshop which was aimed at reequipping the female journalists with contemporary skills to make them relevant in today’s journalism also had Titilope Fadare, a multi-media journalist and content creator for Premium Times; speak on “Story Telling and Mobile Journalism”.

Fadare noted that journalism was fast changing and should be followed carefully in order for one not to be left behind.

“Journalism has so changed and we have to change our skills to suit it… people now pay attention to videos. Things are now fast paced; everything is happening round the clock and now we have competition with citizen journalists, who have their phones and can record events in real time. So, we need to wake-up”, she advised.

Speaking on “Staying Relevant in Journalism: Skills to Invest in”, Justina Asishina, a Data/Investigative Journalist with The Nation charged the female journalists to have basic technology skills, research skills, mo