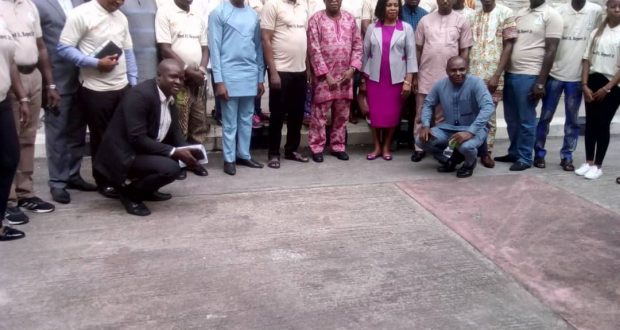 The National Agricultural Council (NASC) in collaboration with the International Institute of Tropical Agriculture (IITA) has organised one day Awareness Building for Seed Analysts and Certification Officers on prevention of Cassava Brown Streak Disease (CBSD) in Nigeria.

The event which took place Wednesday August 31st at the Watbridge hotel and suites, Uyo Akwa Ibom State, had in attendance stakeholders in the agriculture sector.

While interacting with journalists, the Director General of the National Agricultural Seed Council, Dr. Oluwaseun Philip Ojo appreciates Akwa Ibom State government for creating an enabling environment for business to strive. He described Akwa Ibom people as peaceful and hospitable; saying that NASC is ready to partner with the state government through the Ministry of Agriculture in the area of services provision to ensure quality seeds cultivation and disease prevention for bountiful agricultural production in the state.

Dr.Ojo also explained that the Council has been playing very important role to ensure that quality seeds get into the soil of Nigeria through application of periodic scientific research and innovations for greater agricultural productivity in Nigeria and beyond.

He stated that NASC plays very critical responsibility to formulate and implement strategic policies for the prevention of spread of seeds disease, example Cassava Brown Streak Disease in Nigeria and some countries in West Africa.

The General Director specifically “amplified that Cassava disease is causing very serious damage to Cassava crop in Nigeria and West Africa. He said “This is the reason we are holding this capacity building workshop with the aim to remedy the ugly development and enhance greater agricultural productivity”. Ojo added that “This awareness workshop is to sensitise our partners for the prevention of the spread of particularly Cassava Brown Streak Disease in Nigeria and some countries in West Africa”.

Speaking on the importance of the workshop to Akwa Ibom State, the Commissioner of Agriculture, Dr. Offiong Offor who was represented at the event by the Permanent Secretary, Dr. Mary Ukoette Bassey appreciates NASC for choosing the state for the workshop.

She said “The choice of Akwa Ibom State for the workshop is as a result of the state governor, Mr. Udom Emmanuel’s effort in repositioning the state for development. Hence, Bassey emphasized that the state government is ready to partner with the council for the enhancement of agricultural productivity and farmers interest in the state.