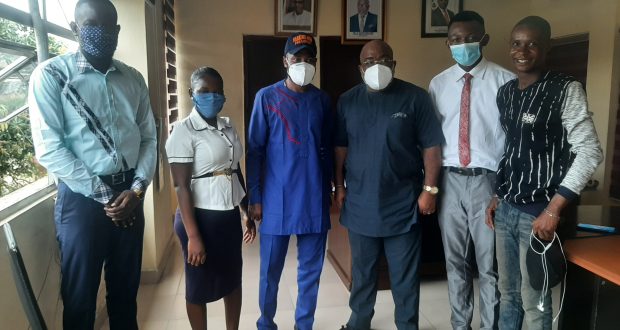 The award presentation which took place at his office in Idongesit Nkanga secretariat, singled out Dr. David for his devotion to sustained and selfless medical services, academic mentorship with creativity in delivering long-lasting results and respect for peers and for being a role model in the medical field.

The students doctors led by the President. Comrade Utomobong Udo in his address said the young and intending health workers came in solidarity to identified with the medical icon having observed with great honour his pure track record in the medical sector.

In his addressed, the President said the award is an indicator of excellence, hardwork, commitment and leadership par excellence which Dr Umo has exude in his calling, “we do not just give it out just as an ordinary award, it is a reward for hard work and this award is conferred to you on merit ” Utomobong stressed.

Comrade Utomobong further explained that the uncommon award is bestowed on Dr.Udo – Umo as a result of his unrelented support for medical doctors and medical profession within and outside Akwa Ibom State, “the award conferred on Dr Udo-Umo is a testament of his iconic achievements and sacrifice in the medical sector by successfully managing all the State owned Hospitals, These and many more form the basis of the award”.

NAAKIMS WW 001, thanked the chairman for always incorporating students doctors whenever medical conference are hold, said the just concluded medical retreat for doctors in the state really gave them the needed exposure, and inculcated in them the rudiments of medical practices.

The president used the occasion to made some notable appealed to the chairman for more State housemamship slot for graduating Doctors of Akwa Ibom state origin noting that its always a joy to come back home to serve.

On his part, the Special Assistance to the president on Health and medical outreach Comr Idara Ekpuk described Dr Udo-Umo as the father of doctors in Akwa Ibom State, added that he has plays a fatherly role whenever doctors call on him any time, any day, “I am happy that this much coveted award comes to him and indeed a man I always call the father of students doctors in the State. He expressed confidence that Dr Udo-Umo will do more.

In his response, Dr Udo- Umo thanked the students doctors for the honour
done to him, praised and lauded the foresight of the president for
capacity and showing leadership within his short stay in office, pledged his unflinching support to the growth and development of the association, poured fervent blessings for them to succeed.

On the State housemanship slot for graduating Doctors, the Chairman Hospital management board Praise His Excellency The Governor Mr Udom Gabriel Emmanuel who he said had already given approval for employment of more house officers in the state, assures the President of more in due time.

Speaking on world Malaria day that is coming up, April 25th Dr. Umo assured that, he will work with ministry of Health to give the medical students the due assistance.

The President also used the medium to inaugurate special scholarship fact finding Committee with Comr. Idara Ekpuk as the Chairman and Comr. Ubong Edereyin as Secretary, among other students across various institutions with a call on them to be transparent, rooted to,ensure the captured the most less privileged Naakimsites. adding that Dr Glory Edet expect noting but total transparency in the selection process. He however gives them three weeks to submit their findings.

Responding, Chairman of the committee. Comr. Idara Ekpuk Thanked the President for the opportunity to serve, promised to deliver in the assigned duties.