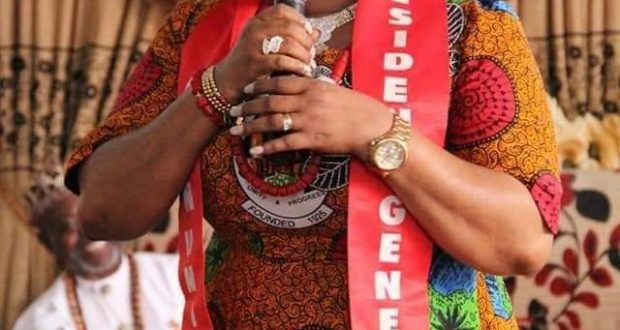 Bottles of champagne have started pomping in celebration, and glasses are clinking in toast to Chief (Mrs) Janet Amba, the first female President-General of the revered Oron Union,who turned 50, today, September 23, 2019.The 50th birthday is one of the most important birthdays in the life of an individual.Any person who attains this golden age deserves to be honoured and celebrated.

Though she probably might not been around to partake in the festivity owing to her busy schedule, wherever the Prime Minister of Oro Nation, as she is fondly called by the people of Oro, friends and associates,is at the moment, the plethora of accolades and birthday wishes, would have got to her somehow.

Born in 23rd September, 1969, Mrs Janet Amba is the wife of the Commissioner of Police, Ekiti State, Mr Asuquo Amba.By birth, she is from Uboro-Oro in Urue Offong/Oruko Local Government Area,but hails from Mbokpu Uko Akai still in Urue Offong/Oruko by marriage. This mother of six has been roundly applauded for charting a course for Oro Nation.

What course?You may want to ask.Having known that the purpose of life is service to others, using our talents and interests to give hand,ear,or heart to another in need, according to Sri Harold Klemp, in his book “The Awakening Soul,” Mrs Amba offered herself to the service of her fatherland.She made history on December 31,2017 in Oro ethnic nationality to be the first woman to be elected the President General of the 94-year-old Oron Union.Until her emergence,she was the Vice President-General 1 of the union.

It is warming to note that the administration of this great leader of our time has not disappointed the people of Oro.She has shown a great sense of commitment and focus so far.John Maxwell,in his book, 21 Irrefutable Laws of a Leader (1997), said “Everyone can steer the ship, but it takes a leader to chart a course.” Chief Mrs Janet Amba has indeed charted the course for the Oron Union by instilling discipline in the administration of the union.She possesses relevant Ieadership skills.She is hardworking, energetic,skilled in planning, organising,coordinating and good at summarising discussions.Testimonies abound of her strides in office. Her office doors have remained open to lofty ideas, brilliant suggestions and criticisms.Everyone who has come in contact with the President General of Oron Union has had cause to testify to her listening disposition and readiness to render help and assistance.

Her achievements in about two years in office include clearing of the entire bush around the premises of the Civic Centre, transformation of the prestigious Oro Civic Centre with a modern hall design, lightings of the centre, setting up of a functional office with furniture and working equipment, provision of welfare for training of children and prompt payment of salary to all secretariat staff as well as reunification of Oron Union with other unions in the state.

Others include welfare packages for over 600 physically challenged people in Oro Nation, reconstitution of various interest groups of the Union as in Oro Think-Tank, Council of Elders, Oro Union Women Wing,Youth and the Students Wings, creation of many branches of Oro Union, award of scholarships as well as payment of school fees to indigent students of Oro origin, registration of candidates for Unified Tertiary Matriculation Examinations (UTME)
across Oro Nation, registration of Akpakip-Oro Seafood Traders Association with the Corporate Affairs Commission, among others.

There are many sides to Mrs Amba.She is always entertaining, a go-getter, a successfull business woman and a no nonsense leader.
She is a woman of substance; imbued with outstanding leadership qualities, a dependable team player with proven ability in coordinating and spearhearding organisational objectives.She is a rotarian.Her hobbies include learning, human capacity development, humanitarian service, traveling and reading.Such is the stuff this golden lady with a golden heart is made of.

The indefatigable President General of Oro Union has engendered a new narrative in the administration of Oro Union.

As Akwa Ibom people roll out the drums to celebrate the state on its 31 anniversary, I heartily congratulate this alumnus of the Great Ife on her golden birthday.

The people’s PG, once again, congratulations and Happy 50th Birthday!!!