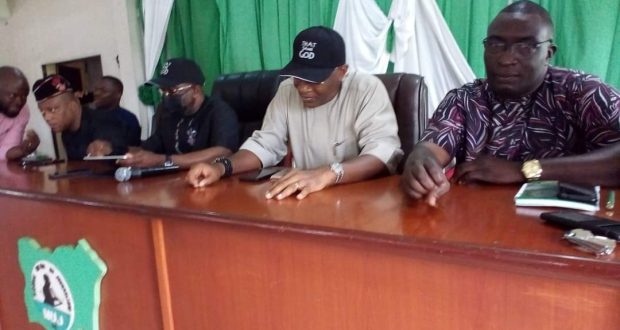 The well publicized political movement in Akwa Ibom state, Maintain Peace Movement (MPM) will on Friday this week unveil and inaugurate both the national and state Coordinators for the group by His Excellency Governor Udom Emmanuel, who is also the Grand Patron of the organization.

This arrangement was made public today in a Press Conference addressed by the Acting National Coordinator of MPM, Barr Emmanuel Enoidem at the NUJ Press center, Uyo.

According to him, the briefing was to seek continued partnership between the NUJ and MPM towards the path of peace and to formally invite members of the Union to the ceremony scheduled to hold on Friday the 19th of November, 2021 at the Godswill Akpabio Stadium by noon.

The MPM he said was a socio-political organization seeking to inculcate the spirit of peace in the heart and minds of the people.

He described Governor Udom Emmanuel as a man of peace and a child of destiny whose peaceful disposition has been the foundation and anchor where strong pillars of development across all sectors of economy in the state is built.

“We the media to partner with us in the part of keeping peace in the state, peace can only be found in oneness and unity.
MPM was established on 28th July, 2021 to celebrate the achievements of the governor in bringing peace to Akwa Ibom State, even as it seeks to solidify on the monumental gains of peace as emphasized by the Governor

As a people who have witnessed first hand the benefits of peace, we have launch out to plant the seed of faith accross the land”.

He reemphasized that MPM is not a political slogan but a movement that is conciously acknowledging the commitment of the Governor towards inculcating and setting the agenda for peace, for whoever will take over the governance of the State in 2023, preferably from Uyo Senatorial district, as zoning is not base on Federal Constituencies.

Enoidem also charged Journalists to partner the state government to achieve the actualisation and implementation of Ibom Deep Seaport for the benefit of the people.

In his reaction the chairman of NUJ, comrade Amos Etuk pledged the Union’s readiness to partner the MPM and the Governor to succeed respectively.

“I’m excited that this partnership has started in a very peaceful mode, I thank you for coming to NUJ.
This relationship between the MPM and the NUJ will never be taken for granted especially as our colleagues are also among the main team players and as we walk the road towards 2023.

I pray that God will give Governor Udom Emmanuel the wisdom and grace to lead us through very peaceful transition, he is the best media friendly Governor in Nigeria and NUJ will continue to work as partners to sustain for bigger Akwa Ibom project”.