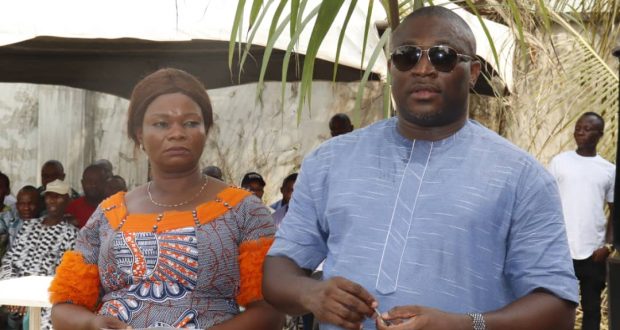 The scheme is a 100 Million Naira worth of business and economic support by the Member representing Ikono-Ini Federal Constituency in the House of Representatives, Obong Emmanuel Ukpong-udo.

Deliverying a welcome address at Ediene Ward 10, erstwhile Council Chairman, Engr. Edet Umotong, expressed happiness with the performance of the federal lawmaker, stating that as a campaigner for the member, he was proud of the product he sold to the people. PDP Party Chairman, Barr. Moses Akpan corroborated his views declaring that the result of the member’s representation had reawakened the conscious expectation of diligent party men.

The empowerment, he explained, was in partnership with the party at the State and Chapter level and would be a recurring decimal all though his tenure, not a one-off per 4yr term.

He advised the selected beneficiaries to make good use of the grant as there was a possibility of more support on the basis of productivity. Five persons from the Ward 10 received Five Hundred Thousand Naira (500,000) business empowerment grant each, amounting to Two Million Five Hundred Thousand Naira. Another constituent in ward 9 smiled home with a brand new car while six brand new motorcycles were handed to six constituents in fulfilment of the lawmaker’s promises to them at different fora.

Responding on behalf of the beneficiaries from Ward 10, Nsikak Henry lauded the member for finding them worthy of his magnanimity, stating that their decision to support him was justified.

The State Assembly Member, Hon. Asuquo Nana Udo in his remarks lauded the Federal Lawmaker for his unparalleled magnanimity while urging party faithful to remain steadfast as everyone stands a chance of reaping rewards of their labour to the party.

At Ward 9, more encomiums poured in for the member at Ward 9, notably from the Chairman Ward 9 Elders Forum, Charles Umoh, who extolled the member for ending the cycle of mediocre performance that plagued the constituency for long. He prayed God to grant him the enablement to sustain the tempo and to exceed expectation.

Responding, Obong Ukpong-udo seized the opportunity to reel out his achievements and developmental initiatives he had brought to bear in his short time at the Green Chambers.
Obong Ukpong-udo reechoed his commitment to creating young millionaires across the 21 wards of the Constituency. Phase 1 of the programme being the pilot scheme, Rep Ukpong-udo disclosed that he decided to pick the beneficiaries individually while Phase 2 and 3 beneficiaries will be recommended by the stakeholders of the ward. Three (3) persons from ward 9 received half a million naira each as business empowerment.

He cited the huge sacrifices he makes to put smiles on the faces of his constituency while reiterating that more was in the offing.
“I went around ward-by-ward to canvass for votes and therefore I will go ward-by-ward to empower my people, no one-off empowerment like the norm is. I won’t send assistance to someone through another, I will identify my people individually and bless them individually. My financial liabilities in service to my people far exceed my earnings but I have to think outside the box with the help of God to do what i do,” he disclosed.

It was carnival atmosphere in Ward 11 as the people turned out enmasse to celebrate their jewel. The Council Chairman, Hon. Itoro Columba, Party Chapter Chairman, Barr. Moses Akpan and the State Legal Adviser, Barr. Goddy Unoh were on hand to present the business grants to the beneficiaries. One car owner and five (5) cash beneficiaries emerged, each getting five hundred thousand Naira business grant.

In their separate remarks, the Ward Chairman of ward 11, The State legal Adviser, Barr Goddy Umoh, the Council Chairman, Hon Itoro Columba, the PDP Ikono Chapter Chairman, Barr. Moses Akpan, SSA to the Governor on Petroleum Matters, Sir Victor Etefia and the Ward Chairman, Mr. Okon Effiong Akpan unanimously lauded the House of Reps member for doing the Constituency proud and living up to his promise of “giving back to Ikono/Ini what rightly belongs to them”.

The Council Boss, Mr Itoro Columba, said it was practically impossible for anybody to be able to impact on everybody at the same while suing for patience on the part of those yet to benefit. Ikono, he said would be a highly empowered Local Government Area considering the quality of persons representing her in various positions while urging the people to live in peace for meaningful development to thrive. The State legal adviser, Barr. Goddy Umoh emotionally prayed God to bless the member for restoring the glory and honour of the Constituency.

Business empowerment grants and items doled out today across the 3 wards visited were worth 13 million Naira.

Rep Ukpong-udo had, earlier in the day, paid a condolence visit to the family of Hon. Emmanuel E. Ndon, Ward Chairman of Ediene Ward 10 and Chairman of Ward Chairmen in Ikono who passed on recently.

In his condolence message, the member described the deceased as a strong party man who stood solidly behind him without any record of blemish. His death, he said, was a painful one to him, the party and the Local Government at large. He enjoined the family to be consoled as God will see them through while promising to be supportive to the family before and after the burial.