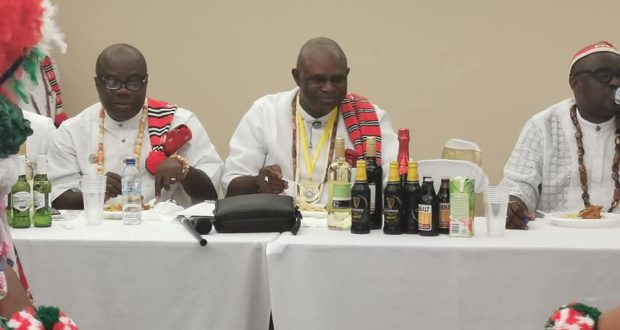 The international wing of Mboho Mkparawa Ibibio in London have called on the State government to better the lots of Akwa Ibom people through provision of basic human amenities in the nooks and crannies of the State .

The Mboho Mkparawa International convention which took place in London was attended by global leaders of the organisation from various countries who had flown into London for the conference.
The keynote speaker Mr. Jimi Adeleye a former Policy Adviser to UK government. presented his paper on youth, good governance and what the government should do to be all inclusive. The youth ambassador said that youth are the life wire of any Nation and as such should not be neglected by any government if they want to build egalitarian society.

Other contributors added on the needs of elders becoming mentors to emerging leaders going into politics.Ms. Tele Lawal, a Councillor in the borough of Havering spoke on her journey into politics and how she ended being the youngest elected female Councillor in the borough under the Labour Party. She advised the leaders that to build a strong engaging youths, needs everyone’s input and mentor-ship. She appreciated the support she got from others in politics and self-determination she has.
On his part Mr. Aniefiok Douglas Ekanem called on the Nigerian leaders especially in Akwa Ibom state to utilise the resources available in the state to creates more meaningful employments.

He call on government to make provision of diversified economy as well as providing more agricultural facilities to engage the youths in productive agro-output. He commends the energy dedicated by the diaspora of MMI in changing the narrative of Akwa Ibom people.
The second part of the convention had more than 250 people in attendance and twelve new members were inducted into the organisation.

The theme of the London 2019 Convention “BRIDGING THE KNOWLEDGE GAP OF THE YOUTHS TOWARDS SUSTAINABLE GOOD GOVERNANCE AND SOCIO-ECONOMIC DEVELOPMENT”.
The Chairman of the occasion, Mentoring Cmdt. Alistair Soyode added words of wisdom, leadership advice strategies and what it takes to build and sustain good governance. He called on Nigerians to always seek for candidates with historical background, experience and credibility in their known fields or industries.
The International President of the MMI, IBIBIO, AKPARAWA (OBONG) PATRICK UDOFIA invited and told the delegates the policy ideas of MMI, Government initiatives and what the group is aiming to achieve towards integration of members, globalization of the organization for the building of a 21 Century Mboho Mkparawa Ibibio, Ibibio Nation, Akwa Ibom State and Nigeria.
“The Youths are supposed to be the drivers of the initiative but so far, they are yet to be given the opportunity to do so. The “NOT TOO YOUNG TO RUN” law is in place in Nigeria. It is our prayer that the law is allowed to work”.

Speaking further the President told the delegates that his term has seen to Dallas Chapter of Mboho Mkparawa Ibibio inaugurated and inducted 35 members, starts new projects on educational empowerments and paid welfare entitlements to members as at when due”, Obong Patrick explained.
“I urge you to be good ambassadors of Ibibio race and Akwa Ibom State in Europe. Respect the laws of the land and engage yourselves only on legitimate business. Remain your brothers and sisters keepers and support one another in the spirit of oneness for service which is our motto. Do not forget your roots but remember to attract investments back home”.
The State Governor, His Excellency, Akparawa (Deacon) Udom Gabriel Emmanuel was represented by Permanent Secretary Akparawa Oliver of Ministry of Trade and Commerce. The governor called the citizens to utilise the experience gained to build Akwa Ibom State.