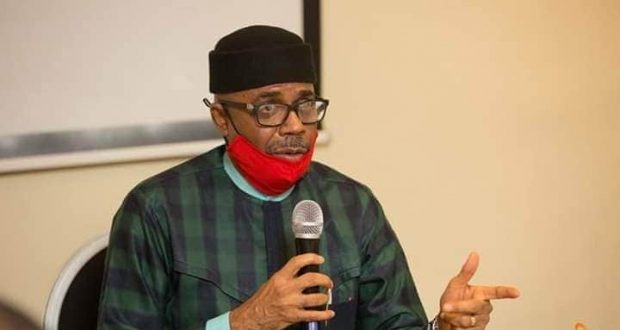 …Installs Self as Mkpat Enin Political Leader, As Nocturnal Meeting Ends In Chaos

Barring any timely intervention from powers in the state, Mkpat Enin Local Government Area might become a theatre of crisis ahead of the upcoming Local Government polls as the ‘commissioner designate’ from the area, Prof. Eno Ibanga has begun to steer the trouble waters by arrogantly embarking on feudal imposition spree.

News broke out this morning that the Acting Vice Chancellor of Akwa Ibom State University, AKSU, Prof. Eno Ibanga who goes about bragging that he is ‘the apple of Governor Udom Emmanuel’s eyes’, held a nocturnal meeting last night with skewed session of Mkpat Enin politicians, with the sole agenda of perfecting his bid to personally install all the 14 councilors across the 14 wards of the LGA without the input of the ward leaders of each area.

The Professor is said to have also disclosed at the meeting that he will personally install the next Local Government Chairman with his money and influence, and has perfected plans to sponsor one septuagenarian to contest for Chairmanship in the upcoming elections.

Earlier in the week, information filtered across the area that the University Don, who is however a neophyte in politics commissioned his dependants to compile a list of people across the 14 wards and submit to him as Councillorship aspirants, vowing to ensure that whoever makes the list becomes a councilor.

Feelers from last night’s meeting, attended by few of his political dependants has it that Prof. Ibanga bragged that with his nomination as member of the state Executive Council and his relationship with Governor Udom Emmanuel that he has become the political leader of Mkpat Enin LGA and that he will use the upcoming Local Government polls to make his point.

Tension is reportedly very high in Mkpat Enin as political stakeholders are warming up for a showdown should the Professor make any attempt to misuse or abuse his position and insult the sensibilities of the people of the area.