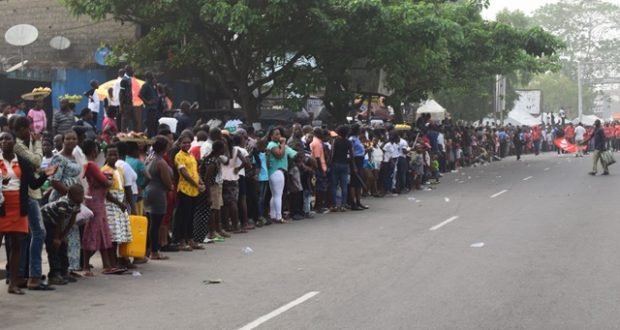 By Frank Edima and Ogar Monday

Mixed reactions have continued to trail the 2017 Carnival Calabar with residents of Calabar sharing diverse opinions on the performances.

Opinions from the people, here are some.

Mrs. Gloria Umoh who owns a shop on the Carnival route posited that the time difference in the performances and the delay in flagging off did not go down well with her.

“It wasn’t interesting at all. They did it late and the various bands were not going accordingly. One band will pass and it will then take from 45 minutes to 1 hour for another band to pass,” Umoh said.

She added that: “Some people even left without seeing the end of it. I suggest that next year they should do it early so that people can sit and enjoy it. The Carnival is one of the reasons why some persons didn’t travel. But, because it started late most people couldn’t enjoy it.”

A reveller, Ibitham advised organizers to flag off the Carnival early and lampooned the idea of people standing late into the night to watch the annual procession.

“My take on the last carnival is that I was not impressed. One, they started late and the bands were supposed to move concurrently but they wasted time on the road. They should start early next time, for people that are coming from far, so that one can get back to the house on time.”

He continued: “The carnival is for the spectators, those who stand on the road and watch, so why will they be on the road at night watching the carnival, especially with insecurities everywhere?”

He advised the organizers to: “Borrow a rope from the previous administration, like when Donald Duke started his own he starts around 12 PM so that by the time the last band will get to the finish point it will be around that 5; will get to the stadium around 8pm and before 12 we must have rounded up.”

For Mr. Ibem, the turnout was impressive but the organization was poor.

He averred that: “The organization for this year’s carnival was poor compared to the previous ones but the turnout for the carnival itself was massive compared to last year, I will urge the Governor to try to organize it properly especially in terms of costumes, bands procession and time.”

It Was Fun – Chioma

A lady who simply identified herself as Chioma, said it was all fun as the party lasted all night.

“Other ones have been good, but these seems to be the best, and it seems this one has the most turnout compared to other ones. You can imagine the traffic in town, hotels were filled up and ATM’s were filled.

“I have never witnessed a Carnival in Calabar that people came and enjoyed themselves till dawn.

“It was fun, it was really good. I enjoyed myself, people that came to my place, because I live by the road. I cooked and they ate, they didn’t even wish to go, they drank all the drinks we had at home. It was fun,” She said.

On Facebook, Pamela Braide, a development expert said the event was poorly planned.

“The Ayade administration needs to review the mess it is making of our hard earned carnival and even festival in general,” wrote Pamela who argued that the revellers were tired which made them give a lackluster performance and the priorities were misplaced

“Attention was focused on placing useless speakers on parts of Marian instead of lighting for DSTV and others covering it. So coverage halted until they got to the stadium. Too dark. We have lost viewing content

“The beauty of Cross River carnival was after each one there is a meeting of bands and leaders and officials including medical and logistics teams with NO HOLDS BARRED critique in front of the governor. Suggestions and even hot quarrels make the next one better. I wonder if anyone has the guts to tell this particular Governor the truth or if reviews still hold.

“I saw no headline sponsors. I hear because of clashing appointees with poorly defined positions. Our constituted agencies were unable to do the simple sponsorship drives we have done for 14 years now, each raking in more cash than the last. Everyone and no one was in charge,” Pamela wrote and maintained that the bodies by law mandated to work have been stripped of running costs and authority to act unopposed by all manner of appointees.

And, the acting Chairman of the Association of Cross River Online Journalist (ACROJ), Mr. Hope Obeten said that the tourists who visited for the Carnival deserve an apology.

“#CarnivalCalabar2017 I think our over 2 million tourists that came into Calabar for the carnival deserve an apology,” wrote Obeten on Facebook.

Obeten who is also the publisher of CALABAR BLOG added that: “I can imagine the inconvenience you went through flying into Calabar even with the bad weather, booked hotel rooms (at) over 150% the actual rates, came out for the carnival at 10am up till 7pm but couldn’t see any band. Returned to the hotel tired, angry and devastated. Tune into DSTV to catch up yet no show!

“We are sorry! next time when you hear Carnival Calabar again, we hope you will come.”

The Passion 4 band had emerged winners of the Carnival.