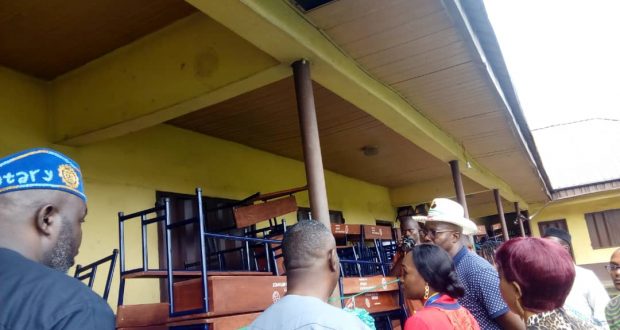 Delivering her address while making the presentation, the President of Rotary Club of Uyo Metropolis, Rotarian Ndifreke Inwang explained that, they embarked on the project given the importance the Club attaches to providing a conducive environment for learning.

She stressed that the all mportant place of education in the development of man and the society, as well as for nation building cannot be over emphasized, arguing that, any form of support for the education sector for the overall interest of our children from well meaning individuals, groups and organizations is a welcome development.

Reiterating that, basic education and literacy is one of the focal points of Rotary and being
the bedrock of a nation, Rotarian Inwang charged stakeholders in the sector and government at all levels to give priority to improving the quality of education and creating enabling environment for learning, even as she charged the pupils to maximise the gesture by taking their studies seriously. She said the school desks were provided in recognition of the role the physical environment contributes to the learning process and the desire to get more students off from sitting on the floor to sitting comfortably on a desk to learn, while also complementing the Akwa Ibom State Government’s Free and compulsory education which has witnessed steady rise in the number of enrollment in schools.

Also speaking, the District Governor, Rotarian Sam Uko, observed that the Rotary Club is known for being the most active and effective body that contributes to improved living through its numerous humanity focused programmes around the globe.

Rotarian Uko further stated that, being a Rotarian translates to inheriting the greatest responsibility of serving humanity, maintaining that, if it were possible, the Rotary Club would love to solve the whole problems of the world. He used the opportunity to call on good spirited individuals to continue to partner with the Rotary Club in its vision of serving humanity and bringing goodwill to the world

Reacting to the gesture, the Chairman of Ikot Ekpene Local Government Area, Hon. Unyime Etim lauded the Rotary Club of Uyo Metropolis for always rising to meet challenges and proffer solutions to societal problems.
Hon. Etim observed that, the Government alone cannot resolve every problem in the community and therefore sued for similar efforts from other Corporate and Civil organizations to partner governments in identifying and meeting challenges in the nation.
He assured that, his administration will continue to play it’s part to consolidate the free and compulsory education sustained by the Governor Udom Emmanuel led PDP Administration in the State.

Responding, the Headmistress of the School, Mrs Elizabeth David Udo expressed appreciation to the club for the generous donation of the school desks for the pupils, which she confessed, has gone far in solving one of their basic needs.

She pledged that the School management will do their job better and prayed God Almighty to bless and empower Rotary Club as they continue to touch more lives and solve more problems for mankind. The Headmistress also charged her pupils to not only thank and pray for the donors, but to aspire to become Rotarian’s in future and also give back to society.

Some teachers in the school including the Deputy Headmistress, Mrs Regina Umoh and
Chairman of the School Based Management Committee, Comrade Monday Anige, all of
who interacted with our reporter said, the gesture has lifted up a huge burden from the School and promised to take good care of the school desks.

High point of the event was the formal Induction of the Local Government chairman of Ikot Ekpene as a Rotarian and he was decorated with a Rotary pin by the District Governor. Pupils from the School also staged performances and songs to welcome and entertain their guests.

The Rotary Club is an International organization whose stated purpose is to bring together business and professional leaders in order to provide humanitarian services to advance goodwill and peace around the world.

The event was well attended by Parents, Pupils and Staff of the School. Other dignitaries who attended the event include the Assistant District Governor, Rotarian Mabel Ekanem, Rotarians from Ikot Ekpene and members of Rotary Club Uyo metropolis.

Previous: NSE Scores A’ Ibom Government high on Roads Construction
Next: No industrialization without access to information, CSO warns AKSG