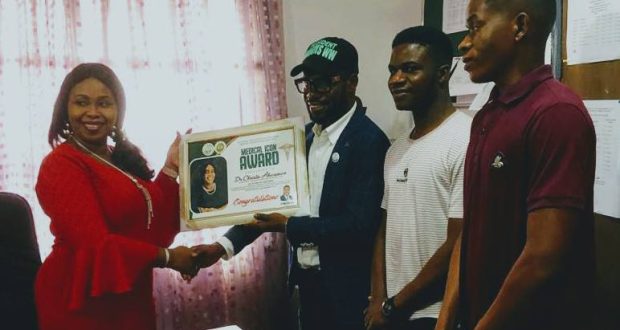 The Former President of Medical Women Association of Nigeria, (MWAN) Akwa Ibom State, and a Senior Lecturer in the department of Community Medicine,UUTH Dr Christie Akwaowo has commended Akwa Ibom Medical Students for always living up to the expectations despite the hectic and tedious academic curriculum they’re exposed to which justifies why they’re regarded as post graduate students.

Dr Akwaowo gave the commendation recently after being conferred with a Medical Icon Award as A TUTOR OF DOCTORS BY The Leadership of The National Association of Akwa Ibom Medical Student Worldwide led by The President Utomobong Udo in a courtesy call on her in her office.

Dr Christie Akwaowo herself, A consultant Community Health Physician noted that while other students spend four years ,the medical Student are expected to spent above six years before graduating due to hetic academic curriculum. She said that in other part of the world, Medical Students only gain admissions to read medicine when they had completed a first degree and here those who have to come in through direct entry do that with a first degree of not less than second class upper which justifies the respect medical Students have in the society.

The former MWAN Boss, expressed happiness to see medical Students get involved in much leadership positions, adding that she has been following up the activities of the association and that she is also satisfied with the leadership of the Akwa Ibom Medical Students acknowledging the fact that the President has achieved much success since resumption into office as President. She recounted the role she played in the medical student Leadership back then in the University of Calabar as the First Editor in Chief of The popular syringe Magazine, adding that integrity should be the watch word for members; an attribute she also exhibited as a Medical Student leader.

Dr Akwaowo Particularly thanked the Leadership of the Associations for nominating her for the Honour which she said will spur her to do more in the training of competent doctors.

Earlier, in his speech, the Naakims Worldwide president Utomobong Udo described Dr Akwaowo as the most friendly Consultant to Medical Students. He highlighted the activites of the Naakims Worldwide Health summit which also featured the launching of the maiden edition of the Association’s magazine adding that the selection of, Dr Akwaowo was base on merit in recognition of her outstanding contributions to the the growth of the Association and in the training of doctors.

High point of the meeting featured presentation of magazine and award to Dr Akwaowo. A vote of thanks by the Naakims Worldwide Vice President internal, Anthony Anthony brought the visit to an end.