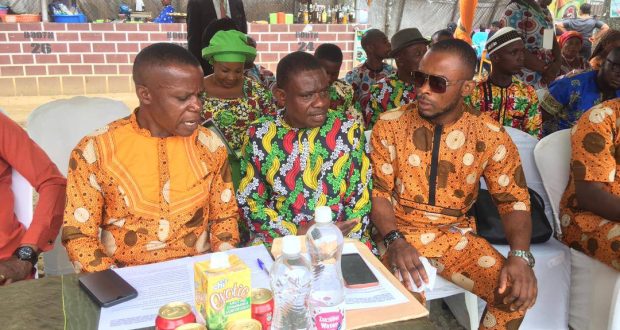 Ahead of the 2023 general election, a socio political group. “My Destiny My Future” has inaugurated the state and ward executive with a call on them to brace up for the upcoming election in order to help elect men of proven integrity who possess the experience and capacity to deliver political dividends to the people.

National President of MDFO, Amb. Chris Akpan during his speech, shortly after his Inauguration in Uyo, Saturday 9th April, called for the participation of all adult citizens in the state to ensure good governance, peace and justice during and after the election.

Mr. Akpan said My Destiny My Future was born out of the urge to create a peaceful political atmosphere in the state, that would guarantee and secure the future of all Akwa Ibom people. He further detailed that, the group which is a socio-political, non partisan organisation is aimed at promoting and supporting good governance in our state and county.

He pledged the group’s preparedness to work hard to ensure that Akwa Ibom people enthrone the best for the top job.

“My destiny my future is a group rooted in all the 31 Local government Area,the group is manage by men of proven integrity, who have been tested and trusted in all ramifications. We do not belong to any politician or political party but an independent group poised to change the narrative of governance by giving those who aspire to lead us a template that would create wealth for our people.” Akpan explain.

He assured that the group will continue to work with Akwa Ibom people to achieve her political aims and objectives and contribute positively towards the enthronement of a better society.

Earlier in his address, Chairman of the occasion, Professor Effiong Johnson lauded leadership of the group for their vision, described newly elected officials as bunch of intellectuals, who will bring their wealth of experience to bear in the assigned tasks, he express optimism that the group will reap the fruits of their labour in a shortest possible time.

The university Don, explained that the right time to put men of proven track record in public office is now, as Nigeria over the years has suffered economic hardships as the result of bad and incompetent leaders.

While giving his Goodwill message, one of the gubernatorial aspirant under the platform of People Democratic Party, Obong Ide Owoidiong, promised to prioritise the critical sectors of road infrastructure, healthcare, education, security and youth development if given the mandate.

The young and vibrant governorship hopeful, said having worked and gathered enough experience in private sectors will inject same to the business of governance for wealth creation.

In their separate remarks, Mr. James Iniama, governorship aspirant, under the platform of People Democratic party and Mr. Clement Jumbo, a Senatorial aspirant for Ikot Ekpene senatorial district who is of the All Progressive Congress, urged the newly elected officials to stand for justice and rally round only those who have what it takes to transform Akwa Ibom to a destination of choice.

On his part, chairman central planing committee, Dr. Thursday Akpan, said membership strength which cut across all strata of the society and political affiliations is over 20,000 with more people trooping in to become members by the day.

He commended the President, Amb. Chris Akpan, a seasoned technocrat, well connected, who he said have demonstrated skills in handling a robust Group like My Destiny My Future Organisation.