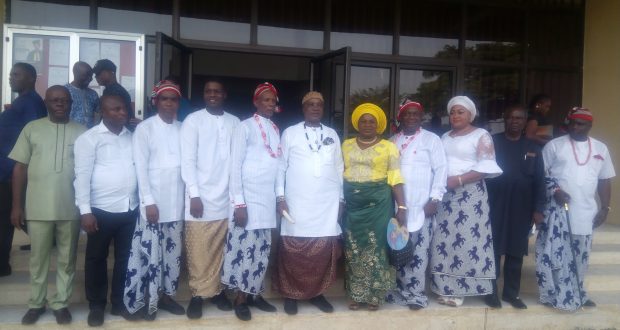 The duo who received an award of excellence in recognition of their humanitarian services to the people of Annang and the entire Akwa Ibom State were also said to have distinguished themselves in representation, lawmaking and oversights.

Others in the award category were Mr Armstrong and Mr Utin who also received gift items for successfully serving the state for 35 years.

In response,Hon. Iwok thanked Nto Annang for honouring him,and sued for continued love while charging all Annang sons in position of authority to discharge their duties creditably. He also advised the people to hold on to God as their strong support in times of need.
The two term lawmaker said he succeeded in serving the people because he involved God in His dealing and sought for his direction at all times. He further advised all and sundry to always put in their best while in service as God will reward them tremendously.

The chairman of the occasion,Elder Ime Moffat, said the event was organised to recognise those who have contributed in piloting the affairs of Nto Annang in the State House of Assembly and to intimate them of the challenges that the organisation is facing.

Earlier in his address,the president, Nto Annang Mr Itorobong Enang said, the union started in August 2007 with the essence to Foster unity among the 8 local government areas making up Annang and to instill a sense of responsibility in the minds of the people of Annang.

He drew the attention of the guests to those Annang brothers whose wise counsel have help shape the Mboho to include Rt.Hon Udo Kierian Akpan,Rt.Hon Friday Iwok,Rt Hon Idongesit Ntekpere,Rt.Hon Nse Ntuen,Hon Otobong J. Akpan and Hon (Dr) charity Ido.

However, Enang further state that during his short stay as the president of the organization have proven to him how industrious Annang people are, use the occasion to outlined some of the challenges being faced by the group to include: difficulty in establishing a working capital for their registered multipurpose corporative society,a well equipped ICT center and the production of the Mboho’s almanac.And pleaded for thier voluntary support to facilitate the process.

Previous: Mboho Mkparawa Ibibio Set To Unveils Health Facility .
Next: MMI president fetes community …Says he’s indebted to humanity because of God’s love, calls on A’Ibom Indigenes in diaspora to come home and celebrate with their love ones.