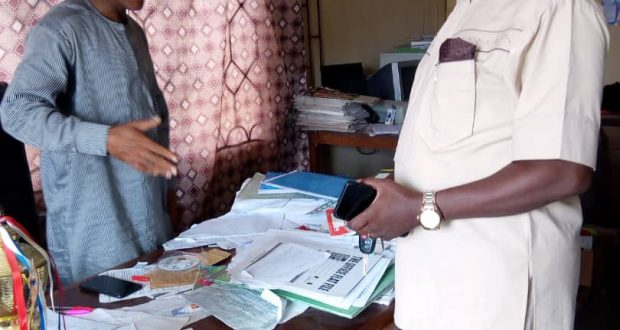 The Special Assistant to the Governor on Education monitoring, Akparawa Udeme Udofia, has called on instructors in our school system to allow their name to speak for them through professional service delivery.
Akparawa Udofia made this known during the on-going school monitoring exercise in the state The SA explained that teachers can equally teach through their lifestyles and relationship with students in the classroom.

“The performance of students in our schools can be attributed to the cooperation of parents, guardians, the community and what teachers impact on them, I must emphasize that teachers are very close to the students, so they have all the opportunity to change them if they are committed. As a teacher who wants to carve a niche for yourself, you must adopt professionalism as a habit because of your followers “.

The SA while commending teachers and students of St. Paul Lutheran primary school, ikot Ibiok, in Eket for their excellent and well-organized environment, assured them that the State government would do it’s best in maintaining core values in our various schools through rehabilitation and construction of classroom blocks as part of its plans to chart a new course in the education sector.

Being a seasoned teacher who has taught in many schools, Akparawa Udofia displayed his dexterity for pupils at St Paul’s Lutheran primary school Ikot Ibiok, Eket local government Area, in a one on one interactions, paying Particular attention to the teaching methods employed in order to ascertain areas that could be improved upon for effective learning. At Girls High School, Ikot Ibiok, Eket, the principal Mrs. Rose Friday Benson appealed to the government for a perimeter fencing to ensure that the students are secured and also to curtail students excesses.

The monitoring team not satisfied with what they saw on the ground at Commercial Development Agency Secondary School, Iko Eket mandated that queries be given to teachers who abandoned their duty posts without permission to serve as a deterrence to others. At the point of visit, the team learned that defiant students dominated the school as complainned by the principal, Mr. Friday Dickson. The principal revealed that most students who failed mock exams were directed by the ministry of education to repeat those classes but they rather keep loitering around the school compound than acting base on the directives.

In response, Akparawa Udofia announced that the State government is already taking drastic measures in enforcing the discipline of defiant students. The governor’s aide used the tour to advised Corp members and N-Power teachers in the school to contributes to nation-building through effective service delivery.