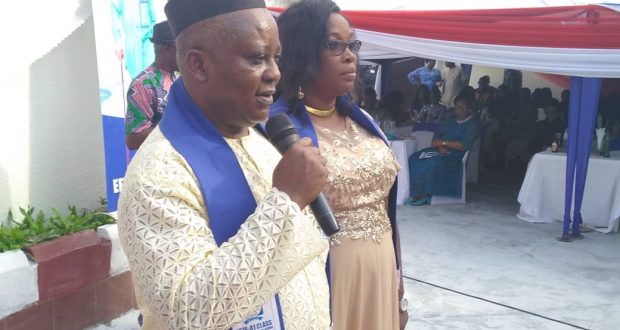 The Head of Civil Service, Elder Effiong Essien has been given a befitting reception by his class cluster of 1976 – 81 for his diligence, attainment and for being a good ambassador of the class of 1976 to 1981 and the school. Addressing the gathering, the Chairman of the occasion, His Excellency, Ambassador Etim Okpoyo who is also an alumnus of the school represented by the National President, Lutheran High School Obot Idim, National Alumni, Engr. Enobong Billy Etuk, acknowledged that Elder Effiong Essien, the Head of Civil Service, is a good product of the Lutheran High School Obot Idim, Ibesikpo whom they were very proud of. He said that Elder Essien’s quality foundation training in Obot Idim has shown in his intelligence, humility, humane disposition, diligence and hard work throughout his academic pursuit and career in the service. The Chairman assured that with his experience and impressive track record in the service, he will shoulder the demands of his new office effectively. He expressed the gratitude of the Alumni Association to Governor Udom Emmanuel for finding one of them fit for the exhalted position and prayed for God’s grace and wisdom upon Elder Essien. Ambassador Okpoyo also used the forum to draw attention to the deplorable state of facilities in schools and called on all old students to create time to visit, mobilize and give back to their alma mater to complement government’s effort at repositioning the education sector for effective teaching and learning. He pledged the continued support of the group to the present administration. In his response, the Head of Civil Service, Elder Effiong Essien, said he was overwhelmed by the show of love, best wishes and solidarity by his Class of 1976 to 1981, and the entire Alumni of the Lutheran High School, Obot Idim Ibesikpo. He thanked God for his grace upon him, his family, his class, the entire old students of Lutheran High School Obot Idim and his attainment in life. Elder Essien, who was accompanied on the occasion by his wife, Deaconess Uduak Essien, extended special appreciation to his wife for being pivotal to his successes in life. The Head of Civil Service, who was full of thanks to the State Governor, Mr. Udom Emmanuel, said he was humbled to be so appointed to the exalted office of the Head of Civil Service. He commended the state Governor for his recorded development strides in the state including his favourable disposition to the welfare of workers, serving and retired, and promised to do his utmost to justify the confidence reposed in him. He called for continued supports for the Governor to enable him achieve more for the state and workers.

Elder Essien commended his Class Cluster for building an health Centre for the school and promised not to relent in contributing towards the rehabilitation of facilities in his alma mater to restore the school to her former glory. He hoped for continued partnership with all the class clusters to ensure that the school gets a face lift.

In his speech, the Chairman of the Class of 1971 to 81, His Lordship, Hon. Justice E. Ekanem, a justice of Appeal Court of Nigeria, joined his voice in thanking the State Governor for giving one of them the opportunity to serve as the Head of Civil Service. He assured that with Elder Essien’s track record and God’s grace, he will deliver on his assignment. He thanked all the Alumni and guests for the honour done one of their own and prayed God mercies and protection upon them.

In his homily at the event with the theme “the power of togetherness” taken from Psalm 33 verse I, the National President of the Lutheran Church of Nigeria His Grace, Archbishop Christian Ekong who was represented by Bishop Michael Emmanuel Ukata, said everyman should give thanks and praises to God for every attainment and providence in life. He admonished all in position of authority to use it to render service to humanity. adding that promotion is ‘turn by turn’. The Bishop also took time to exhalt the sterling qualities of the Head of Civil Service and thanked the alumni for the reception in his honour. He prayed for God’s grace upon him to enable him succeed in his new office.

Other Alumni and Guests, including the Secretary of the 1981 Class, Elder Okon Okon, Dr. Emmanuel Ukpong, Mrs. Margaret Udoh, the Senior Prefect, Girls of the Class of 1976 – 81, presented their goodwill messages at the event.